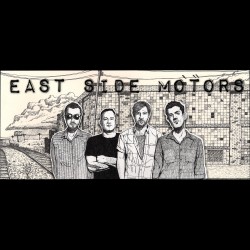 East Side Motors is a Waterloo/Cedar Falls band that is plowing their own row in the field of Midwest Roots Rock. That’s a thousand acre plot at least, so they don’t sound like they felt constrained to plow a straight furrow. Neither are they tangling the tractor in the fences. Conventional? Maybe, but limits can do as much to make music interesting as unbounded imagination. Their self-titled debut echoes Bruce Springsteen, The Replacements, John Mellencamp and even Bob Seger, all masters of the big song with a simple melody that still manages to surprise. East Side Motors takes after those guys and more often than not, they nail it like a 16-penny nail through a fence post.

In the foreground is Ben Driscoll’s voice, which balances fluid phrasing with a subtle twang that gets rough around the edges as needed. Without ignoring the rest of the band—who give Driscoll the solid foundation he needs to dance around the beat—Ben’s a singer’s singer. He’s got some of Van Morrison’s edge-of-chaos urgency, but unlike that old mushmouth ginger, his diction is faultless, keeping the lyric clear in the listeners mind.

His piano playing sets the band’s sound apart from most Iowa bands, who love their drums and guitars. His playing makes a strong connection to pre-rock parlor (and bar room) music. He plays in the pocket rhythmically, shifting from off-beat New Orleans-tinged stabs to solid on-beat accents. The upright piano he plays—which sounds like it was last tuned during the Ford administration—sounds like it was pulled out of an abandoned farm house.

The interplay between Driscoll and guest sideman Brooks Strause’s churchy organ hits you right in the heart, particularly on the album closer “Under The Wheels,” whose lyric is a devastating reflection on an absent father: “I know he’s all over your mirror, he’s in every shadow you fear, you see yourself you see him. All of your demons were his.”
In contrast, the rave-up “Worker Bee” uses a perfectly framed extended metaphor that etches like acid: “I never have a hive of my own, I’ll never know where the good honey goes.” This is a song Elvis Costello or Craig Finn (of The Hold Steady) would give up their favorite toe to have written. I hate to tag anyone—especially an Iowa boy—as brilliant, but sometimes you just have to dust off the superlatives. Driscoll’s got a strong back; he can carry the weight.

Kent Williams has found it’s not easy having to spend each day the color of the leaves. He thinks it could be nicer being red, or yellow, or gold or something much more colorful like that.