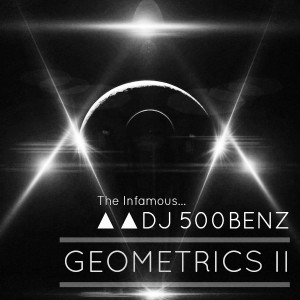 DJ 500 Benz though still in his early 20s has been very active in Iowa hip-hop scene for the past few years, producing beats for a variety of MCs—notably Rahlan Kay’s excellent Relationships from the summer of 2012. Geometrics II is a different sort of thing, comprising tracks that fall under the electro house heading. Electro house has little to do with actual electro or house; it’s the synth heavy dance pop that seems to be swamping the pop charts these days. As an old-school techno and house fan, I feel like I should absolutely hate these tracks. The fact that I keep listening to them means that 500 Benz has some serious songwriting chops. This is full-on commercial ear candy, but done so well I can’t help but enjoy it.

This is a guy who really likes Daft Punk; “Wouldn’t Feel Right” echoes “Around The World” as it begins, with a filtered female vocal. It isn’t a direct copy, though, and 500 Benz’ skill as a producer comes through in the subtle swish in the percussion and rhythmic synth lines. “Coatrooms and Cocktail Waitress” combines skippy drum patterns with a simplistic fat synth line that recalls South African Kwaito. It has the sort of simplistic repetition that goes right up to the edge of mindlessness without falling in.

Given the poppy, super-shiny, up-to-the-minute style of most of these songs, “Go” is a surprise. It’s moody ‘half-stepper’ dubstep emphasizes deep sustained bass, and thankfully leaves out melodramatic bass drops. It’s the sort of thing underground purists point to as the alternative to current obnoxious trends in dubstep. Good on Benz for showing a little taste.

Apparently, Geometrics II is less a finished album than a beat tape, meant as raw material for tracks to be finished by other producers. Each song encapsulates some great dance music gestures but doesn’t bother with the whole build-up and breakdown structure of DJ-centric dance tracks. As such, Geometrics II feels half finished and sketchy. But grab these tracks, put together your own extended edits and you’ll be a hero in the DJ booth. Check out the other joints on his bandcamp page, because DJ 500 Benz has beats for days.

Kent Williams turned up on the streets of Nuremberg in 1828, unintelligible, wearing odd clothes, and walking with a peculiar gait.All he could say is “I want to be a horseman like my father was.”