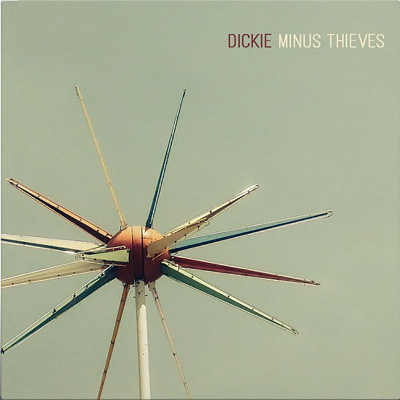 If various comic book universes have taught us anything, it’s that every hero needs an origin story. For DICKIE, that was their 2015 self-titled release — a concept album summarizing songwriter and vocalist Dick Prall’s life to that point.

Returning like Superman from the Fortress of Solitude, Prall has reconvened DICKIE with a different lineup — this time as a dynamic duo with drummer and multi-instrumentalist Billy Barton as his trusty sidekick. This reboot of the band is captured in their latest album, Minus Thieves.

The band, along with producers Pat Sansone (Wilco, the Autumn Defense) and Josh Shapera redirected from the previous string-ladened, chamber pop leanings to a leaner version. This lack of adornment is at once subtle and dramatic. The focal center of the band has always been Prall’s vocals and songwriting, particularly in a live setting, but in places we might expect a song to move to an instrumental break or solo, the songs fold back on themselves, maintaining the economy of structure.

Minus Thieves’ opening salvo, “The Last Breath of Rock & Roll” is Prall’s rumination on the state of music today, reflecting on a time when it was more essential to life. He paints a scene of deciding whether to go out with friends to listen to music or pay the bills.

With all of the usual varnish of production stripped away, the songs reveal Prall and DICKIE’s superpowers: the strength of a strong hook and melody. Nowhere is this more apparent than the first anthemic single from Minus Thieves, “Believe.” It opens deceptively with only tick-tock percussion from Barton and plucked guitar, recalling “I’m on Fire” by Springsteen (complete with “woo-o-woos”). When seemingly out of nowhere the song explodes into the driving chorus — a harmonized mantra, “Believe… I don’t believe!” — something huge and sadly beautiful happens, which sticks in the listener’s head.

With Minus Thieves, DICKIE provides an album delightfully out of step with how we tend to consume music today. They aren’t the heroes we deserve, but quite possibly the ones we need.

This article was originally published in Little Village issue 270.