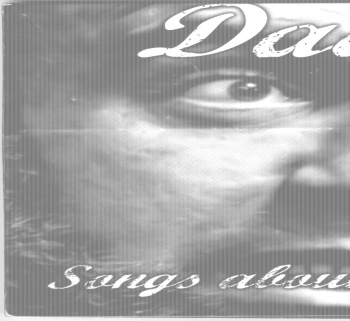 The first time I encountered the man now known as “Daddy” was at a Kickass Tarantulas show at the old Gabe’s. Dressed in a Speedo, he was rolling around in the cigarette butts, spilled beer, and broken glass in front of the stage, bellowing like a wounded wildebeest. Whilst living in Iowa City he performed in various guises, ending up founding and fronting the legendary Family Van.

A longtime Walmart employee, he once informed me that his work-life strategy was to act mentally ill so people leave him alone to do his job. But is he really crazy? Is his ‘music’ (scare quotes necessary) a desperate plea for help? Is it a horrendous piss take that threatens to become uncomfortably literal? I’ve known the guy for ten years and I still don’t know. In person he’s every bit the cordial gentleman; I’d even eat the produce he stocked at the Super Walmart. But in his 20 years before the mast of Punk Rock, he’s stayed true to his muse, and she’s one foul-mouthed, crazy bitch.

His new project as “Daddy” is the country record he’s been threatening to make for years, and he’s brought together a band to back him up that is more conventionally musical than past projects. There are drums, guitar and bass that play in tune and keep a steady beat, and Daddy comes within shrieking distance of actually carrying a tune.

But if this is country, it’s the kind that would give Dolly Parton violent nightmares. “Sick Freak” is a sprightly country two step with a Jug solo where he sings “Darling please understand I wanna be your john I wanna be your man.” It’s followed by “Song For Samantha,” which is touching in a way: “You’re so young and full of life, puke in the sink most every night. Keep you here would not be right, girl go out and get f*cked tonight.

This is patently offensive music with no commercial potential whatsoever. It’s also completely original, and the sort of funny where first you laugh, and then you feel ashamed. Quentin Crisp once said “Those who once inhabited the suburbs of human contempt, find that without changing their address they eventually live in the metropolis.” Daddy, aka David H., aka Luthor the Geek is the kind of outcast who sees civilization coming in the distance and lights out for the territories.

Kent Williams was an American baseball player who played in the early part of the 20th century. He is remembered for his performance on the field and for his association with the Black Sox Scandal, in which members of the 1919 Chicago White Sox participated in a conspiracy to fix the World Series.