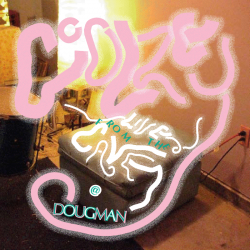 Zachary Lint, alias Coolzey, normally slings rhymes and crafts beats, however, last November he took a little break from hip hop to stomp out a set of raw tunes that he’s finally put out into the world. Live From the Cave @ Dougman is an unvarnished, hyper-eclectic collection of simple tunes. When Coolzey sat down in “the cave,” he set out to prove how much he could do with just a few riffs and scant flourishes. There’s a different sound and style for each one of these lo-fi tunes.

The album’s fourth cut, “On the Ground” stands as one of the most successful tracks on Dougman. In fact, for all the simple compositions on this collection, “On the Ground” may be the most basic. A beautiful little number about a dreamer and all the power it takes him to remain grounded is built on an eighth note acoustic strum. Lint’s vocals sound completely unencumbered by any stylistic baggage. The sole flourish comes with the song’s final verse when a light, angelic, synth line floats in and and seems to carry this dreamer away, leaving behind the expectations of those around him.

Then there’s the somber, angular “Driving.” The seventh track on the album is a cool, moody tune with a simple programed beat and a whole-note keyboard vamp. Lint continues to flex his vocal dexterity, opting for a detached croon as he mourns the distance between himself and a former lover. The dispassionate delivery and composition belie the intensity of the lyrics—“When I’m driving away from you / I see smoke and fire”—and when he finally breaks down in the bridge, the longing comes through all the more clearly for that disparity.

Coolzey closes Dougman out with a bit of what he’s best known for. “Wire Mother vs. Cloth Mother” is all about Coolzey’s flinty fire spitting over an old school loop made of stuttering midi key tones and and a body slamming horn line.

If you want to see every muscle Coolzey can flex, there’s really no better place to start than Live From the Cave @ Dougman.