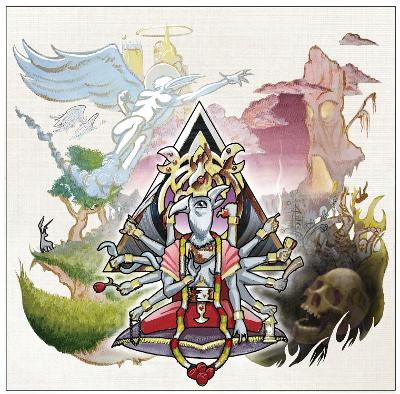 A full-bodied chord progression, disguised as a bridge (where the other shoe just never drops) closes out Condor & Jaybird’s latest album, and it marks the end of an era: the completion of a trilogy six years in the making. First there was The Kingdom, then The Power — now, The Glory is the climax of sonorous occult mysticism powered by light, friendship and more substances than went into any Hunter S. Thompson feature.

The Glory is Condor & Jaybird’s fourth studio album, but it’s their first made entirely “in-house,” so to speak. Guitarist-singer Jeramie Anderson recorded and produced. Anderson is one of three veteran members, the others being the illusive Connor “He Was Just Here” Lyle and drummer Bryson Foster, who’s already declared a favorite song from the album:

“’Sleep’ showcases everyone pretty nicely while staying poppy and experimental at the same time,” Foster says, referencing the fourth track.

Experimental is always the word of the day for Condor & Jaybird. For example, “Sleep” — which is also the favorite of newcomer to the band, bassist Dave “The Sound Guy” Perry — owes a lot to ’50s- and ’60s-era pop harmonies. Some of Perry and Fosters’ fondness for the song is likely due to the playful flow of thumpery drums and scales that trip around the land of Oz.

But then immediately after that, the song “Time” — which, at the moment, is my own favorite — is a rock opera, making use of the track layering the group is so fond of. The technique might make new listeners expect the band members to number in the double digits. In fact, there are more robust examples of this on the album, but I feel like revealing where qualifies as a spoiler.

“Remember” is eerily beautiful, especially in the final movement where it fades into reverberating tones just discordant enough to be unsettling; Ari Aster (Hereditary, Midsommar) should include it in the soundtrack for his next horror film.

“Monster” is another headbanger that makes me want to lock the band in a studio until they’ve produced a spiritual sequel to the Who’s Tommy.

That doesn’t even cover half of the album, but I’m running out of room here, so you’ll just have to add it to your iTunes queue. Or, better yet, grab one of the limited number of vinyl copies they’ll have available at their record release show. Also on the bill are Minnesota’s Harakiri, long-time friends to the Quad Cities music scene, and the original bridge-gazer Mountain Swallower, back from a hiatus.

In the realm of Good vs. Evil, it’s generally accepted — and has been since Milton’s Paradise Lost — that the latter is much more fun and exciting. Condor & Jaybird reject that premise; their mythological/quasi-biblical trilogy celebrates that mirth and ecstasy fall within the sphere of virtue, well within our reach, even as we enjoy the filth of mortal existence.