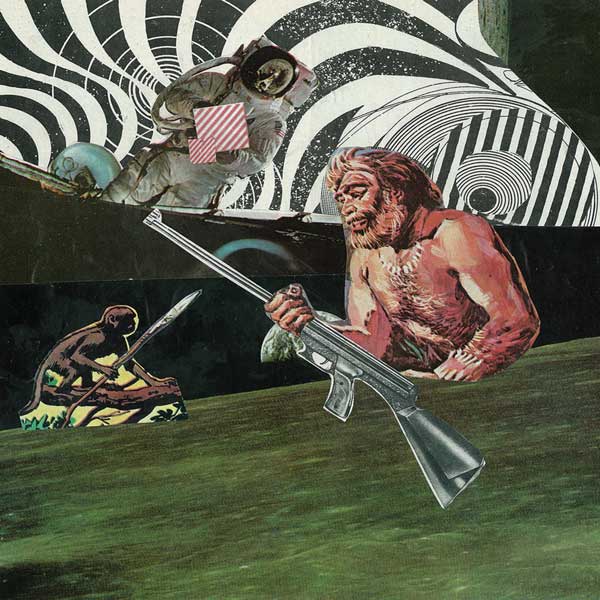 Although Iowa City band Commanders is already revving up some new tunes with a new bassist, their 2017 release, Stones, Stooges and Spacemen, is well overdue for attention in this space. With its brash title, the album invokes some of the greatest acts in ’60s and ’70s rock and roll and then evokes them throughout with a heavy dose of what Mick Jagger, Iggy Pop and David Bowie had most in common: strut.

Stones, Stooges and Spacemen arrived at LVHQ in cassette form. The renegade red of the cassette tape, the on-point collage album art by jack-of-all-trades band member Dustin Kelly (he’s credited with guitars, vocals, keyboards and percussion) and the interior liner notes that include all the lyrics all made me feel like a kid again. The choices were bold, especially for 2017, but they were lovingly built on a long history.

The tape, thank goodness, had a digital download code taped to the outside. I’m honestly not sure if I even own a cassette player that still works. And I wasn’t at all sure if, in the modern push for constant novelty, straightforward, ’60s-and-’70s-style rock and roll would still work. Here, it does. To tell the truth, it probably wouldn’t with any other band. But Commanders leverage equal parts homage and innovation to maneuver this music from the history books and classic rock stations into the here and now, thanks in no small part to the mix mastery of Flat Black Studios’ Luke Tweedy.

Commanders kick off many of the tracks on the album with riffs that echo some of the great tunes that went before, but quickly spin off on an uncharted course. They tease some of the punkier and more psychedelic bents of their inspirations without ever truly veering into those genres. The album’s greatest gift is, again, its unabashed strut.

Nowhere is that more evident than with singer Chris Burns. His voice is aggressive, extravagant and confident — the only possible sound for this album, and the glue that holds everything together. He is strongest on album closer “Under the Feral Spell,” where a brief a capella interlude about halfway through lights the song on fire.

The album opener, “Go Back Down,” comes across as a bit cautious (appropriately, perhaps, for lyrics that begin, “There’s a damn good chance that we don’t know what we’re doin’”), but Commanders find their footing on track two, “She Don’t Worry,” with Shawn Haigwood’s driving lead guitar laying a firm foundation that carries through the rest of the the album. All told, Stones, Stooges and Spacemen honors its namesakes with solid artistry and a lot of love.