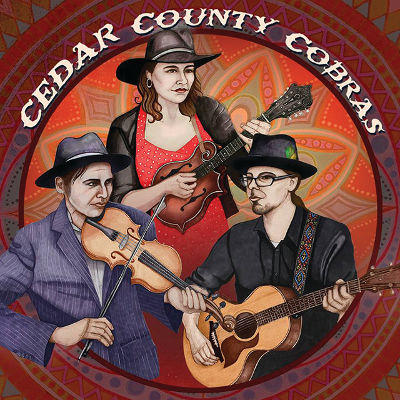 Cedar County, Iowa is home of West Branch, Springdale, Clarence, Lowden and the Cedar County Cobras. Their debut album’s title, Delta Avenue Juke Joint, is an inside joke: Delta Ave. is a county road that connects nowhere to nowhere a few miles north-east of Cedar Bluff, where the album was recorded. It’s the kind of place where fun is, of necessity, homemade.

The Cedar County Cobras probably won’t mind being called a string band, a title with a storied tradition that goes back to African-American street corner bands in the American south. The band draws on old-timey country as well—the sort of music University of Iowa professor Harry Oster recorded in town halls and general stores around Iowa in the ‘60s and ‘70s.

What is fresh, in general, with this style of music is that it’s meant to be played and listened to live, in settings intimate enough that no amplification is required. In an age when almost everything is at root a form of electronic music, playing acoustic music must feel like a revolutionary act.

What is fresh, in particular, about Cedar County Cobras is that they don’t feel constrained by the weighty traditions they work within. They sing on some songs, but many tracks are strictly instrumental. “Spaghetti Western” is one such wordless song, and takes as its subject classic Italian-made cowboy movies of the ‘60s. An acoustic folk band putting together a song that’s essentially a collection of cues for an imaginary western movie, influenced equally by Doc Watson and Ennio Morricone? It’s the kind of crisscrossing reference and allusion that would excite a Comp-Lit PhD candidate. It’s also fun music without needless complication.

I blame Neil Young for giving a thousand unschooled singers license to bother people in public. But the Cedar County Cobras do as Neil did: They find an artful way to stay on the same side of the street as the melody, but only just. Tom Spielbauer and April Dirks vocals are raw and unruly. Together, their voices tug and collide with each other both rhythmically and harmonically.

Folk music is meant to be played by folks—meaning you and me, and Average Joe. Most who try should keep it to themselves, on the back porch. The Cedar County Cobras manage to use some of that back porch dust in their music, and make it into something that’s approximately art. To paraphrase Marvin Bell’s most famous poem “To Dorothy,” Delta Avenue Juke Joint is beautiful, inexactly.

This article was originally published in Little Village issue 189.