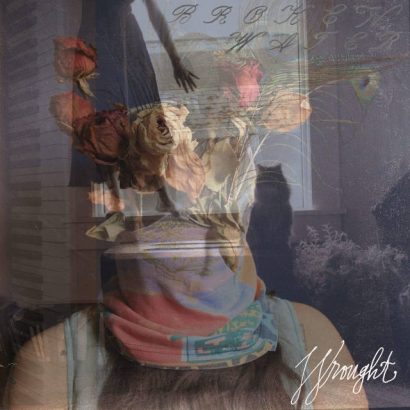 Although Shawn Reed no longer lives in Iowa City, his label — Night People — has its heart here, at least partly-so. In an interview for Art of Iowa, Reed said that while “the label grew out of being into records, booking shows, inviting touring bands to play (in Iowa City),” it “doesn’t live any place in particular.” Night People has put out LPs and cassettes for bands from all over: Merchandise from Tampa; Peaking Lights from Los Angeles; Dirty Beaches from Montreal; and, with its recent LP Wrought, Broken Water from Olympia. And as Reed identifies his label with no one region, so the bands on Night People conform to no single genre or aesthetic.

The more you listen to Wrought, the more the album becomes a kind of sonic Rorschach.

Broken Water is a case in point. Their new album, Wrought, has obvious links to grunge, the genre most closely associated with the band’s home state of Washington. Steve Fisk, an engineer who worked with Nirvana and Soundgarden, recorded and mixed the album, in fact. But to play up the grunge connection is to ignore myriad other musical elements: the lush layers of fuzz, characteristic of shoegaze in general and My Bloody Valentine in particular (e.g. “1984”); the quick rhythms and clean tones but dissonant notes of no wave (e.g. “Choice,” or “Psycho Static,” which features a viscous baritone vocal by Hanna that’s reminiscent of Thurston Moore); patches of hardcore or noise-rock (e.g. the wordless chorus of “Hi-Lo”); the overt political themes of punk (e.g. the lyrics of “1984” and “Choice,” with references to government surveillance in the former and abortion rights in the latter); the bouncy  and lean drum-and-bass grooves that recall New Zealand pop bands like The Bats or The Clean (e.g. “Stone”).

In fact, the more you listen to Wrought, the more the album becomes a kind of sonic Rorschach. I say “Rorschach” because while Wrought contains a variety of ‘90s styles, they don’t pop out at you. They’re blended. The listening experience is unified, not disjointed. The album is a whole, with certain shades and textures suffusing it. The layers of fuzz are stacked tall, and chorus pedals create a watery glaze that evokes the Pacific Northwest’s continuous drizzles. The palette is gray-blue: everything’s minor.  Overcast. Uptempo songs manage to sound slow, and aggressive grunge-infused ones sound sad.

Lethargy, melancholy and teenage disaffection, which characterize both the lyrics and the sound of Wrought, are not conditions peculiar to the Pacific Northwest, of course. They pervade most U.S. suburbs, if we’re being honest. But Broken Water’s Wrought is also characterized by a clear-eyed searching, a glint of hope conveyed by Kanako Pooknyw’s feathery alto, which graces seven of the album’s 10 songs. Pooknyw’s voice resembles that of Bilinda Butcher, the vocalist for My Bloody Valentine (though she also reminds one of Enya or Julee Cruise). But whereas Butcher’s voice often becomes a texture seeping into other textures surrounding it, Pooknyw’s cuts through and moves above the clouds.