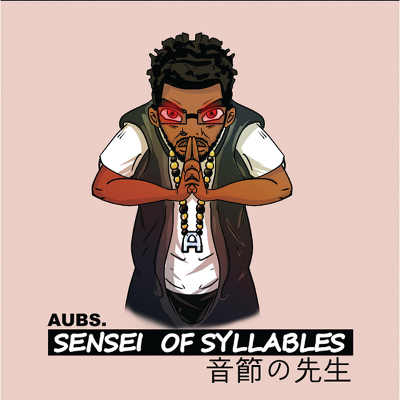 The first time I heard Aubs. perform the titular “Sensei of Syllables,” he was on the Rozz-Tox stage with one of his writing students. Abdur, 12, had just made his debut at Roaring Rhetoric, the spoken word event series Aubs. founded.

Aubs. is Aubrey Barnes, known to the QC lit community as a performative poet with a steady, rhythmic delivery and experimental style. He’s one of the most ambitious working writers in the region. His dual album Sensei of Syllables I and II is an experiment in poetic lyricism.

“It was a challenge of combination of the arts that I value,” Barnes writes in our texts about the project. “Part I was much more experimenting, trying out … what worked and what didn’t. Or better yet, what was me and what wasn’t.”

Barnes is a lot of things. In addition to the work that falls under the umbrella of Aubs., he teaches and maintains an academic career with a focus on writing. He’s teaching When Battle Rap and Poetry Meet: A Writing Workshop with Aubs. at Midwest Writing Center on Friday, Feb. 7 at Rozz-Tox in Rock Island, Illinois.

His experience as a teacher appears in his lyrics. Por ejemplo, the end of “Dat Skonk” seems to include part of a rant I’ve heard many a writing instructor recite in so many words (“… but your resume sucks when I see it on paper / most of y’all write like you were first graders …”).

But for a lyric more indicative of his style — teaching, writing, being, etc. — look to the opening of “Black Samurai (Jabez Da Sorrow)”: “They said, ‘black boy, be more wise’ / there’s no such thing as a black samurai / imagination’s not for guys / you cannot be a black samurai …”

The song goes on to describe the social oppression of a cerebral youth who finds strength in imagination. It’s a theme at the core of Barnes’ lessons: Use knowledge and creativity as a power for good.

His choice to exchange “wiser” for the less grammatically correct “more wise” — with emphasis on the first half of “wise” — is a sample of the playfully sardonic sensibilities that make him so accessible. He alludes to expectations, which he then subverts, to give the listener a window into that experience of our aforementioned cerebral youth — of the “outsider,” so to speak — through active listening. In other words, we have little choice but to engage with the lyric, which itself is composed of mental breadcrumbs designed to lead us to form a conclusion.

Funnily enough, Aubs. considers Sensei of Syllables, Part I — which includes “Black Samurai” — to be almost frivolous in comparison to Part II. If Part I was an experiment to explore his identity as a poet and rapper, is Part II a confirmation of that identity?

How does he know when he’s found what’s him and what isn’t?

“As corny as it sounds, by Feel,” he writes. “Whenever I create something, I have a gut feeling that affirms I wrote a certain bar or verse from a place of authenticity, or just because it was convenient and easy, if that makes sense.”

“From a practical place, I know it’s me when I have a balance of writing something that is dope as fuck lyrically, and also says something … whether thought provoking or truth-telling.”

This article was originally published in Little Village issue 278.