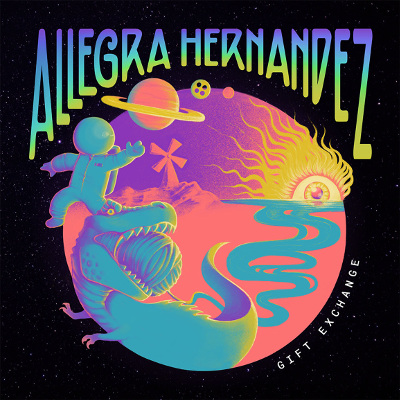 Musician, guitarist and educator Allegra Hernandez returned to Des Moines in 2018 after their stint at McNally Smith College of Music in St. Paul, Minnesota was cut short when the school closed. That time afforded them a solid basis in music theory and performances at Twin Cities venues like the venerable 7th Street Entry. Hernandez finished this education online at Berklee, all the while also teaching music at Des Moines institutions like School of Rock and Girls Rock!.

In 2020, Hernandez released a three-track EP titled Pearl, which unfortunately wallowed in obscurity as they were unable to bring these songs to audiences during the lockdown. On their new album, Gift Exchange, which comes out Nov. 4, they sing, “I wrote a song it’s two years long / So please know that I’m here yes I’m here yes I’m here / I just take a long time to respond.”

Gift Exchange, while much more accomplished and polished, picks up where Pearl left off and is a suitable bookend to it — beautiful vocal harmonies and melodies ensconced in fantastic guitar work delivering first-person vignettes like pages ripped from a diary. That two-year-long song clearly resulted in some serious chops.

This album is a perfect example of how strong songwriting and vocals can be paired with exceptional guitar skills. The fatigue from flashy guitar histrionics common during the hair metal and grunge eras makes Hernandez’s approach novel and fresh — supporting the melodies and harmonies while also allowing the guitar to speak as part of the architecture of the songs. They don’t shy away from big chunky distortion and searing leads, which are used effectively where they appear.

The lead track, “Time and Surface,” opens with a few bars of a deliciously slinky four chord motif decorated with harmonics that echo the verse. There’s violence and hurt alluded to. When we return post-chorus, the song leans somewhat “djent,” with crunch and bombast punctuated with halts filled with ringing dissonant guitar chords and siren notes, reminding us of the “angry fists / making the dents.” A perfect marriage of music and theme.

The track likely to get the most attention on Gift Exchange is the anthemic protest tune “Use My Fkn Pronouns.” Delivered with super-catchy, hook-filled energy, I found myself singing along. “And how many times does it take for you / To address me in the right way? / (It’s) just as important as my name” — a message couldn’t be delivered more effectively than this rallying cry in a song. And the message doesn’t supersede the music here — the skanking bridge with bouncing and sliding bass could have been ripped from a Red Hot Chili Peppers album.

There’s a lot to discover and digest on Allegra Hernandez’s debut album. In many ways they have a unique voice — delivered with earnestly uncompromising songwriting. Hernandez summed it up best in an email to me about Gift Exchange, “My music is for anyone to listen to and enjoy but is dedicated to the communities that I come from and where I am celebrated, especially for queer people.”

Your bio mentions a couple of stints at colleges of music—were you able to work on this style of music there or was that more heavily focused on theory?

Music education was something I have always valued growing up. … In high school, that was when I decided to pursue going to college for music. Throughout high school, I seriously focused on playing guitar and writing songs all the time, taking lessons and learning from other music mentors.

When I was in 11th grade, [Mary Anne Sims, director of City Voices, a nonprofit music education program based in Des Moines] saw a video of me playing guitar and encouraged me to apply to colleges such as Berklee and other contemporary music colleges …

Interestingly for me, what I learned in college doesn’t always directly apply to my own style of playing. In college, there was a big focus on jazz, blues, funk and of course some rock. The focus for me was applied music theory for the guitar, technique, sight-reading and other guitar-based classes … What influenced my playing was the bands and shows that I got gig experience from in the music scene and my own influences beforehand.

With the education I received, I am a more well-rounded guitarist who knows the fretboard in detail and understands not just how to play but knows what I’m playing. … I don’t use very advanced theory in my writing process but since I have that knowledge, I can actually dissect and understand fully what I’m playing.

I wondered if working with students in Girls Rock! and School of Rock on their instruments has paid off in helping you sharpen your playing.

As an instructor at School of Rock, I have to learn or at least familiarize myself with dozens of songs every few months. … I can learn songs quickly and efficiently, chart out songs for my students, etc. I have sharpened a lot of my fundamental skills on guitar from a beginner to an advanced level. I have students as young as 6, teens and also some adult students of all ages … I have to meet my students where they’re at and take into account their learning styles. If I can successfully teach them concepts, that confirms how well I know it myself and fortifies that skill. …

As a younger guitar instructor (24) and being the person I am (being nonbinary/queer) I find that I don’t see a lot of guitar/bass/drum instructors like me … I never had the chance to study under a non-male guitar instructor growing up and I feel passionate about teaching and inspiring girls and LGBTQ+ youth to play music, which is why I’m so passionate about Girls Rock! Des Moines. … Girls Rock! has been so important in my growth as a young adult navigating the music industry.

GR!DSM is … so much more than music — it centers around empowerment, identity, social awareness/social justice and a place where you can unequivocally be your authentic self. There are very few places in the world like Girls Rock, where you are constantly celebrated and uplifted. Your identity and expression are honored every day and brought to the forefront.

This article was originally published in Little Village’s September 2022 issues.