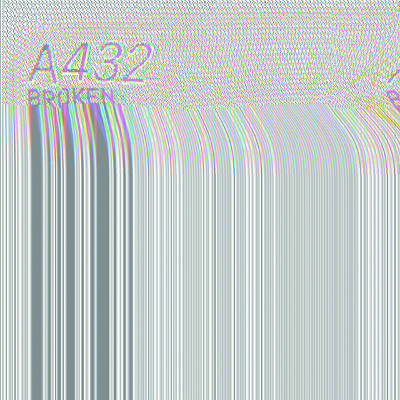 A432 (Iowa City’s Logan Stimmel) calls himself a sound artist, rather than a musician — which means that I have high confidence many Little Village readers will not like Broken. A432’s music sits in the general vicinity of the music of Autechre and Richard Devine. It is deliberately abstract, without being arbitrary. Any sounds that originated as acoustic vibrations in air (i.e., “normal” music or location recordings) have been digitally altered and treated to render them unrecognizable.

The track titles aren’t much help. “Chuck Flannel [3.e]” is kind of funny, but “o9;” is a real head scratcher. The former is a sequence of sustained chords that eventually get a mixed-meter beat to them; the latter is 29 seconds of Aphex Twin-esque acid techno that’s over just when you thought it was getting good. “Rhythm & Frequency” sounds like a live performance on a drum set, but is almost certainly a carefully constructed fake made of samples and digital reverb.

“Sehrac Gilht” starts out with a simple synth line, but is complicated and dislocated by electronic buzz-and-click drums playing in no discernable time signature. Sounds that are either drum rolls or buzzing float in and out. Squarepusher was doing something like this 15 years ago, but it was a decorative accent. Stimmel puts it right in the foreground.

Calling an album Broken gives a musician license to commit all sorts of crimes against the listener’s expectations. The broken radio whizzing and bleeping of “The Discoveries From Channel 4” occasionally relent and you get a moment of tonal chords. It’s as though actual music is trapped inside this piece that tries and fails to escape.

Now that I’ve completely scared off the Pieta Brown fans, I will say why you should listen to Broken. It has loads of hard-to-place emotional drama — alien, alienated and lonely. Stimmel’s inventive use of digital sound processing creates a constantly changing virtual space for the listener, and he shapes the splatters and strewn shards of sound with a musician’s ear, giving each piece a pace and sequence that draws you in. Broken is a lot like Iowa weather — if you don’t like it, wait a minute and it will be different.