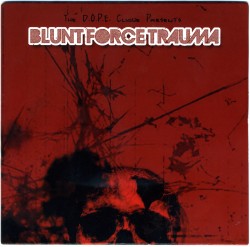 Iowa hip hop has an identity problem. As an urban phenomenon that has gone worldwide, the further it gets from big city African American culture, the harder practitioners need to work to find an authentic way to both stay true to the roots, and to represent their own experiences.

D.O.P.E. Clique is a hip-hop crew representing Des Moines, IA, comprising MCs Young Tripp & Gadema and DJ Richie Daggers. Des Moines is as urban as Iowa gets, which is to say, not very, but D.O.P.E. Clique finds their own way by focusing on the core elements of beats and rhymes, and not pretending to be anything they aren’t.

“Wax On Wax Off” combines Karate Kid reference with the tried and true battle rhyme agenda of slaying the sucker MCs. Gadema raps “This architecture firm brings all of the mortar, I haul the bricks in from the brick yard and sort ‘em, log sawed, and all of the steel and run the auger, build the barn then we call the hogs to the slaughter.” This is the sort of tightly rhymed long form metaphor that makes hip hop interesting, he combines it with tight one liners like “I’m running from my past but my past is gettin’ faster.”

The beats vary in quality—Big Vern’s beat for “Wax On Wax Off” underlines the Japanese theme with Koto samples and is more successful than his harpsichord-driven beat for “The Elite” which feels thin by comparison. JG the Beast’s “Take Me Home” beat is in 3/4 time, escaping hip hop’s 4/4 tyranny; the MCs respond with rolling rhymes accented rhythmically in surprising way. Aeon Grey’s “Puppet Show” beat employs a strange and dusty sample of a voice doubling flutes in a baroque melody fragment and perfectly crappy sounding, loose lo-fi beats. The beat underlines the vocals with authority born of its very oddity.

As I’ve said before about other Iowa hip-hop CDs, this isn’t just Iowa good, but national (or worldwide) good. They’ve got the skills to go up against any crew anywhere. Despite the ‘hard’ title Blunt Force Trauma, they are not violent-minded, or at least not entirely. D.O.P.E. Clique puts some thought and self-reflection into their joints. They’re a thinking person’s sort of thugs.