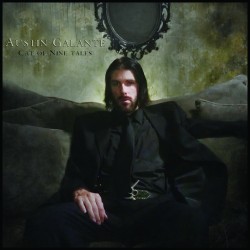 Austni Galante’s musical evolution, from the straight-ahead hip hop of The Committee, to the Rap-Rock of Bad Fathers, to the hip hop/dub step/sci fi of Black Market Maven, to this solo debut, comprises a classically American long, strange trip. Prior to this album, Austin’s output has heretofore been in collaboration with others, including longtime partner in rhyme Juan Hooks and producer Jeff Ryon (and, full disclosure, several years ago, myself). Ryon is credited with mixing and mastering, and Hooks has a vocal cameo on one track, but  Cat Of Nine Tales is Galante’s first solo work.

Galante’s voice and songwriting brings front and center something that previously played more of a supporting role. He has a warm baritone that he deploys with subtlety, which is a new development compared to the rapid-fire shouting that marked most of his work in Bad Fathers. What is most interesting about this album is the way it synthesizes hip hop, R&B and rock into something different. The backing tracks are closer texturally to electronic music along the lines of Boards of Canada, which, combined with electric guitar, puts the songs in a stylistic no-man’s land, in a good way.

Galante is a decent singer, and the arrangements and productions are well executed. What I’d like to hear more of from Galante is harmonic variety and more depth in the lyrics. Most of the tracks are built around static four-bar chord progressions, which isn’t unusual for a hip-hop beat, but feels a bit lacking in the context of pop songwriting. Lyrically the man has a serious thing for women; when he strays from romantic themes, he rarely gets much further away than lust. But the same can be said of guys like R. Kelly, and I’d much rather listen to Cat Of Nine Tales than anything by him. It’s a sturdy, well-made debut record, and I look forward to hearing what he does next.