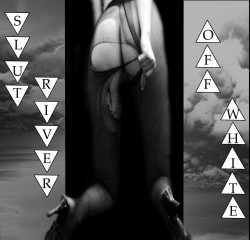 On Off White, Slut River is Joe Ross (also of The Tanks), Mickey Shaw and Matt Fenner (of Solid Attitude) and Anna McDermott. If you’ve been going to local shows you’ve seen the Slut-Riverenes in many different bands over the past few years, but in Slut River they seem to have found a unique, raw brand of punk rock with which to deafen Iowa City’s disaffected youth.

It’s not too hard to hear their musical influences in this record. The more frenetic cuts like the album opener “Two Face” has some of the propulsive hysteria of Melt Banana. They also have a poppier side that shows on “K9 Love” which brings to mind legendary LA punk band X. But Off White’s most winning aspect is the way the band (abetted by Luke Tweedy of Flat Black Studio) captures the intensity of their live shows. Joe Ross’s drumming sounds like there’s a bar brawl going on in the middle of his drum kit. Matt Fenner’s guitar alternates between Ramones-esque bar chord riffing and squalling chaotic moments of noises. Micky Shaw’s bass is both the rhythmic and harmonic center of the Slut River sound; his ability to stay tight and steady allows the rest of the band to go nuts and still hang together.

Anna McDermott’s singing, or more properly her artful, rhythmic yelling, can cut through the din of the rest of the band. She yelps and squalls with snotty, pissed off authority. I suspect she might in other, more conventional contexts be a decent singer, but Slut River asks her to be a punk rock monster, and she delivers.

What makes Off White so exciting is the band’s ability to ride the edge between freedom and chaos. You can throw a rock and hit a punk rock band pretty much anywhere these days in the United States, but most of them are the sort of carefully constructed, safe-for-Hot-Topic engines of capitalism that punk rock rebelled against in the beginning. Those bands are as much about expensive haircuts and cosmetic dentistry as they are rock and roll. Slut River comprehensively doesn’t give a f*ck about that nonsense. The messy, violent, raw tantrums on Off White are paradigms of pure punk rock fun.