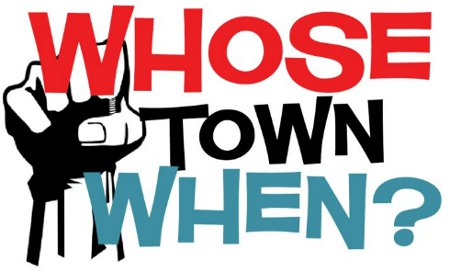 Welcome to Iowa City, brave newcomers! And welcome back, you peregrine types. Your Town Now focuses on local government and, hoo boy, was August a slow month at City Hall. We will get to some of the official city business conducted last month, but first I’d like to roll up my sleeves, pose awkwardly in front of a few carefully manicured hay bales and deliver a little public service announcement.

It’s election season, and the Republican party was good enough to hold its straw poll in time to forget about Iowa before the school year started. That means that many of you got to leave the state while Michelle Bachmann confused John Wayne with John Wayne Gacy and Rick Perry threatened the integrity of his trousers while vogueing at the Iowa State Fair in front of what could have been a set from Baz Luhrmann’s Oklahoma!

Perry thought he was striking an authoritative pose. My entire household simply wanted him to stop. He didn’t. Partly because he’s Rick Perry and partly because we had no way of begging him to stop stretching his Sansabelts to within an inch of their natural lives.

That’s all right, though. Not just because Perry and the rest have let Iowa be for a while, but because Perry’s running for an office that will have relatively little effect on our lives here in Iowa City.

Think about it: Despite what some shrill voices are saying, the economic downturn was the work of many, many people doing many, many shortsighted things for many, many years. No one’s going to fix it quickly–not Obama, not Perry, not Ms. Waterloo herself.

But what about your life, right here? What, say, does your landlord have to tell you about your rights when you take out a lease? Well, Elliott Higgins, the city’s Student Government Liaison, took issue earlier this year with the lack of legal notice folks were getting. His idea for an expanded Informational Disclosure and Acknowledgment Form that notifies people more clearly about rental laws earned the approval of city council. A little step, but one that helps thousands of folks in our very city take a bit more control of their lives.

Forget the presidential campaign for a moment: None of us can enact another round of quantitative easing, or quash it. But if we can make apartment leases more open and transparent, we can do other practical things that immediately change the life of our town.

Things like running for Iowa City Council. The door’s shut by now for applications to run in this year’s election (to take place Nov. 8), but keep it on your radar. The city’s precincts were freshly redistricted in August, but the new battle lines won’t take effect until next year. That gives you time to plot your strategy.

Or joining a city commission. As of the last city council meeting, we’re looking for interested residents aged 18 and up to serve on the Airport Zoning Board of Adjustment, the Airport Zoning Commission, the Board of Appeals, the Housing & Community Development Commission, the Parks & Recreation Commission, the Police Citizens Review Board, the Senior Center Commission and the Youth Advisory Commission. Many commission meetings are open to the public, so you can get an idea of what they’re about before throwing your name in the ring. Meeting schedules and application materials can be found at City Hall, or online at icgov.org.

Or you might just write a letter. Andrew Duffy did that a few weeks ago, voicing his concern over mephedrone (the hideous street drug sold as “bath salts” or “plant food” at little mom & pop stores across the country, including right here in Iowa City). When it hit the scene a few years ago, mephedrone wasn’t included on most states’ lists of controlled substances; because it’s structurally similar to drugs that have been declared illegal, its sale for human consumption is restricted under the Federal Analog Act. So it reappeared, as bath salts.

Duffy’s letter to the City Council was picked up by Assistant City Manager Dale Helling, who brought it to the attention of Police Chief Sam Hargadine. Helling reported that “we were pleased to learn that [mephedrone] is named in House File 150, passed by the legislature and awaiting the Governor’s signature, as a Schedule I Controlled Substance.”

I’ve seen bath salts in other cities, and I didn’t think to investigate their presence here. Given that, I’m not about to suggest that anyone in City Hall should have, either. But when folks like Duffy–and you, dear reader–bring this sort of thing to the attention of folks who need to know, good things happen.

Above all, know that things don’t just happen in this or any other city. We choose to be the city we are. Some Northside residents, for instance, are wrestling with city officials about traffic-relief strategies that might affect their neighborhood. Turns out that, for such purposes, some streets are designated as side streets, others as collector streets. Iowa Citians made those assignments, which, because they’re the work of your fellow citizens, are always up for debate and revision.

When folks aren’t engaged with the life of the town, we get bath salts on corner-store shelves and muddleheaded wastes of money like the consultant’s contract I described in last month’s column. Those things don’t need to be.

Enjoy this town, and keep your gums flapping: Iowa City is always evolving, and you can help make it the sort of place in which you’d like to cool your jets for a while.