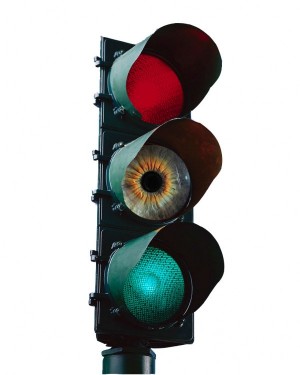 Many of us subject ourselves to forms of surveillance on a daily basis. Every time we post a picture on Facebook or send out a tweet, we are contributing to vast digital archives of data about ourselves, observable to those both within and beyond our social circles. While we do this voluntarily, what a lot of people do not know (or conversely, have already internalized as just part of being human in contemporary society) is that in almost all of our daily actions we are being monitored and our information is being logged whether we explicitly consent or not. In fact, most people are caught on dozens of surveillance cameras every day, from security cameras on ATMs to one of the eight cameras monitoring the Pedestrian Mall. And soon in Iowa City, red light cameras will be added to the list.

Concerned about the red light cameras and their contribution to an intensifying surveillance culture in Iowa City, residents Aleksey Gurtovoy and Martha Hampel are seeking to prevent  their installation, or at least clarify and limit how they will be used, through an initiative that may put the issue to a public vote. Both view the adoption of automated traffic surveillance technologies as a gateway to other types of government monitoring, archiving and processing of citizen actions and information.

Most proponents of the red light cameras say that they will reduce traffic accidents and increase public safety. However, Gurtovoy and Hampel argue that there are several alternatives that could more effectively, and cost effectively, increase safety. For example, yellow light times could be increased giving drivers more time to stop, or all red light intervals could be extended allowing time for intersections to clear. “There is also technology that can delay switching the lights at intersections if a car isn’t stopping or can’t stop,” Gurtovoy adds, “It’s worth debating these other options.”

Furthermore, Gurtovoy and Hampel question whether running red lights is really a pressing issue in Iowa City. According to Iowa Department of Transportation data, Iowa City averages only a couple major car crashes per year, not even necessarily from people running red lights. Interestingly, especially in light of safety being the most cited reason in favor of the cameras, the city of Westminster, Maryland, actually decommissioned their red light cameras partially because they saw an increase in minor intersection crashes.

While many cities like Iowa City are considering or using these controversial surveillance technologies, others, like Westminster, have already abandoned them. A red light camera pilot program was suspended in New Jersey when questions arose over variations in yellow light durations potentially not in compliance with national standards. Los Angeles pulled the plug on their red light cameras after criticism concerning their ineffectiveness as a deterrent, and the increasing expense in attempting to collect outstanding fines. A bit closer to home, and not considering abandoning their red light cameras (yet?), Davenport is estimated to be owed $1.7 million in unpaid red light and speed camera fines. Reported high rates of unpaid red light camera fines in numerous locations can be attributed to multiple factors, including cities not having the ability to further penalize those who do not pay because of state laws, citizen confusion over being ticketed by a private company rather than the police and, sometimes, as a form of outright protest over the system.

Controversy surrounding these red light cameras is also the result of their recent large scale adoption, despite the lack of data proving their effectiveness. Many critics suggest that intensified government lobbying is the main impetus behind these cameras, not public safety. In fact, Mark Clark, a vocal red light camera supporter and police officer in Houston, Texas, was later revealed to be receiving thousands of dollars from a red light camera company, American Traffic Solutions. Other reports of intense lobbying efforts on behalf of red light camera manufacturers have been reported in Connecticut, Florida, Illinois and many other locations throughout the country.

Surveillance goes beyond just being “watched.” We rarely know who is watching, how our activities are being stored or used, or whether they will result in some form of censure. The ordinance the Iowa City City Council passed on Feb. 21, 2012, addresses none of these issues. It also does not specify camera locations or how much the fines would be, all of which are of concern to both Gurtovoy and Hampel.

Before any of these questions can be answered, Gurtovoy and Hampel must submit a revised affidavit for petition and proposed initiative seeking to restrict the use of traffic enforcement cameras. After the initiative is validated by the city attorney, or determined to be in accordance with the Iowa City referendum and initiative process, Gurtovoy and Hampel will still have to collect 2,500 signatures to make the city council consider their proposal. If the city council does not accept the changes, the public would then have a chance to approve or reject the red light camera ordinance during the next regular city election or in a special election. At that point, Hampel will have achieved her primary goal: “All we really want is for the citizens of Iowa City to have a vote.”All of these unknowns coupled with the controversies popping up across the country only reinforce Gurtovoy and Hampel’s belief that there needs to be more consideration and planning if this is the direction Iowa City residents want to head. Transparency and communication with residents in these early stages is especially important, because as Gurtovoy notes, “Once the cameras are installed, it becomes hard to get rid of them or know exactly how they will be used.” Hampel echoes a similar sentiment, “After they are up, when will Iowa City decide we are safe enough for the cameras to be uninstalled?”

As Gurtovoy emphasizes, the importance of this issue goes beyond just managing traffic, “We need to pay attention to what’s going on and think. Freedom is not inherent. Freedom is the result of citizens doing specific things to keep the U.S. a free country. This is a step toward a surveillance society, not toward a free society.”

Melissa Zimdars is a doctoral student in Communication Studies at The University of Iowa, specializing in media and critical cultural studies.