Jarrett Mitchell is moving on to the general election. Photo by Bill Adams 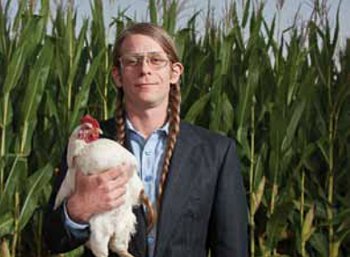 Iowa City, often called the Athens of the Midwest, is, like its more famous cousin, a hotbed of learning, activism and civic engagement.

Nonetheless, only an abysmally low 5.11% of registered voters (2,598 people) voted in our recent City Council primary election, while the other 48,222 registered voters living in Iowa City couldn’t be bothered to, apparently.

In Chicago, the bar I hung out at offered a free beer to anyone who brought in a ballot receipt on Election Day as a reward to people who took the time to do their civic duty by voting.

I’d take it a step further, more stick and less carrot, and mandate that people provide proof they voted before they were permitted to complain about what the council does, but that’s just me.

“But this was only a primary election, didn’t we just turn out in record numbers for the Iowa City Community School District school board elections?”

It did have the second highest vote total in 32 years–a whopping 89% increase in votes from the 2009 school board election–but of the 75,337 registered voters eligible to vote, only 4,492 people went to the polls, a 5.96% turnout. 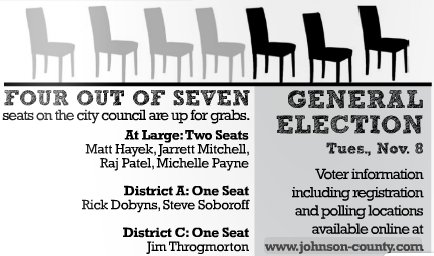 Let’s assume, hypothetically, that all of the 12,000 students in schools served by the Iowa City Community School District came from single-parent homes. This still means that less than half of the parents of the children in our school system bothered to vote in the school board election.

“Parents who use drugs have children who use drugs,” intones the narrator in a famous anti-drug PSA from the 1980s.

Can the same be said about voter apathy? “Parents who don’t vote have children who don’t vote?” I hope not. Otherwise, in a generation or two, elections will be decided by fewer people than could cram themselves into a phone booth, a popular fad–like voting was–back in the 1950s.

Two elections, hotly contested, arguably mandates on important local issues, and neither one merited even a 6% voter turnout?

Iowa City, you’re better than that.

Election season isn’t over yet. There’s still a chance to prove you care enough about the future of your town to spend less time than it takes to read this article to go and cast your vote. If you only have time to do one or the other, please, put down this magazine right now and go vote. I’m okay with that.

The general election is Tuesday, Nov. 8. At stake are four seats on the Iowa City City Council.
For the 94.89% of you who spent October under a rock, here’s how they break down:

The current Mayor, Matt Hayek is running on his record, his experience and his efforts to strengthen the relationship between the city and The University of Iowa.

Despite being something of a stealth candidate–she filed her nomination papers on the last possible day candidates were allowed to do so–Payne picked up the Press Citizen’s endorsement for the primary election.

Patel advanced to the general election, but currently finds himself in some controversy. On Sept. 12, he claimed he was forced to resign from his post with the UISG, citing pressure from students and administrative officials, which those parties vehemently deny. Then, on Oct. 17, Patel issued a press release announcing he had withdrawn from classes at The University of Iowa, due to “over a month of building pressure from members within the University of Iowa community.”

That’s twice this fall that when making decisions related to his campaign for elected office, Patel has claimed certain forces “pressured” him into making his move, yet he’s provided no evidence of such in either instance. Also, depending on when he actually withdrew from classes (when asked, his campaign manager Michael Charles said he was not told the exact date), he may have been disingenuously allowing himself to be presented as “UI junior, Raj Patel,” even after he had withdrawn. What this might or might not say about his overall honesty or how he’d handle “pressure” if elected to council I leave it to you to decide.

District A: One seat

Clinical professor of family medicine at The University of Iowa

Rarely have any two people more different from one another run for the same seat. Dobyns a leading figure in past efforts to crack down on Iowa City’s drinking culture, Soboroff believing that this crackdown has been both heavy-handed and ineffective, and that there are many far more important crime-related issues the police should be focusing on, particularly in the Southeast Side neighborhoods that are part of this district.

In campaign materials, Dobyns acknowledges that the over-concentration of low-income housing has created some problems for those neighborhoods and the schools which serve them. He says this is due to an unrealized “heterogeneity of housing options within all of Iowa City’s neighborhoods.”

Running unopposed in District C is former City Councilor Jim Throgmorton. The recently retired professor of urban planning at The University of Iowa sees his primary campaign issues as ensuring good jobs and a strong tax base, sustaining Iowa City as a safe and welcoming place for all, taking actions that will promote long-term sustainability and resolving conflicts skillfully. He also supports cracking down on what he believes are inadequately maintained rental properties throughout the city which diminish the overall quality of life in the neighborhoods they’re in.

This is your town, Iowa City

Look at it this way: Voting, ultimately, is its own reward. If you participate in the process you’ve at least earned your license to complain when the council (as they always will) does something you don’t agree with.