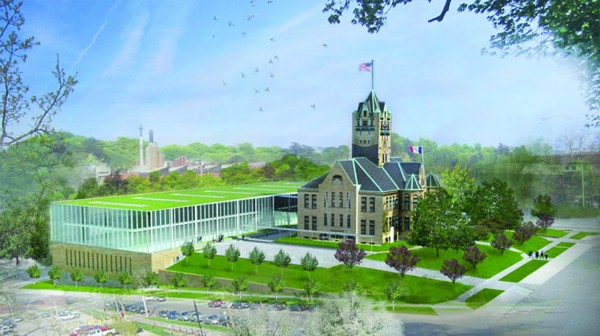 If you can cut through all the glittering doublespeak and rhetoric, you’ll find a deeply ambiguous set of truths about the proposed Johnson County “Justice Center” (read: jail) that will be put to a vote on Nov. 6. (Or right now, if you’re an early voter.)

For dramatic effect, it should be noted that the fight over the Justice Center has transcended mere City Hall drudgery, growing into a near-mythological battle between a well-intentioned-but-vaguely-sinister government and a small-but-feisty band of contrarians.  Or so the story goes.

The Johnson County Justice Center, a proposed $48.1 million facility to be built near the historic courthouse, will address two crises currently facing the Johnson County justice system: an unsafe, overburdened courthouse and an overfilled jail.

According to the County, the current courthouse is insufficient in a number of ways. There are too few courtrooms and administrative spaces, security is lacking, and the building is not adequately accessible to individuals with disabilities. For the most part, however, the jail is the crux of this issue.

Currently, the Johnson County Jail is severely over capacity, and its design compromises the safety of both the inmates and jail staff. Built in 1981, the 92-bed jail is inadequate; the current average daily population is more than 160 inmates. Overcrowding in the county jail has had the effect of “reducing the level of safety for both inmates and staff,” according to a January 2012 report by the County’s Alternatives and Treatment Opportunities Subcommittee.

A summary of safety deficiencies at the current jail provided by the County cites a number of factors, including the jail’s “linear design” (read: long hallways lined with cells). This design limits the staff’s ability to monitor inmate behavior. A general lack of adequate cell space, also, has made more difficult the “legally required separation of inmates based on established classification criteria” and “behavioral isolation” (read: “the hole”).

Because of the current jail’s poor design and over-large population, jail staff and police officers must transport inmates more often than would otherwise be necessary, which raises both safety and financial concerns.

In the current jail, for example, there is no shower in Block E, which means that inmates must be escorted to an adjacent cell block through an area that is not monitored by cameras.

When there is no room to hold an inmate, the typical response from the Sherriff’s Office is to “rent” space at other county jails in Iowa. In fiscal year 2010, Johnson County spent nearly $1.3 million to transport and house inmates outside of Johnson County.

The proposed Justice Center will house a 243-bed jail and Sherriff’s Office, six new courtrooms and additional office space. The jail is to be built according to a centralized “pod” design that allows inmate activity to be more closely monitored and reduces the amount of necessary inmate transportation. More cells, more safety for more inmates. The new, larger jail would address the existential threats facing the Johnson County justice system with what amounts to a “supply-side” solution.

Opponents of the Justice Center like Jeff Cox, a member of Citizens for Alternatives to a New Jail, argue that the new facility would only increase the number of people arrested and held in the county jail. Such an increase would almost certainly exacerbate one of the most unfortunate truths about the Johnson County justice system: Though only about five percent of Johnson County’s population is black, about 40 percent of those who passed through the county jail in 2011 were black.

Increased capacity, the argument goes, will lead to an increased jail population. And more people in jail would serve only to extend societal injustices. Instead, the county should deal with its jail capacity issue by incarcerating fewer people and expanding alternatives to jail for individuals awaiting trial.

Currently, the county jail holds many people who are awaiting trial, but can’t afford to post bail. The Justice Center’s opponents argue that jail alternatives including electronic pretrial monitoring would be a more cost effective solution to overcrowding than the construction of a new $48 million building.

The Center’s opponents, then, are proposing a “demand-side” solution to the problem. Maintain the current facilities, but reduce the flow of inmates to ease the burden on the system.

It is true, of course, that too many people are being arrested. But the fact that 160 people are being squeezed daily into a system built to hold 92 indicates that the laws of supply and demand do not explain the current problem. The “if-you-build-it-they-will-fill-it” argument is compelling, but as of now the relationship between the flow of inmates and the size of the bucket you’re using to catch them is only speculative.

It is also true that speedier trials would decrease the number of pretrial inmates in the jail. Paradoxically, one apparent solution to this problem—more courtrooms and more judges—would be served by the proposed Justice Center.

Opponents of the Justice Center are right to suggest that the popular argument for making the courthouse “more secure” is overblown. There are no recorded incidents of safety breaches at the courthouse, despite its apparently primitive safeguards. That does not mean, however, that the current facilities do not need improvement.

The messiest part of the issue may be the use of pretrial “jail alternatives” to ease overcrowding. Justice Center opponents support electronically monitored work release and home arrest as a viable jail alternative. In 2011, 117 inmates were granted work/school release, and five were granted home monitoring. According to the County, however, expansion of these programs are being held up by … jail overcrowding. The county says the money that could be used on jail alternatives is currently being diverted to pay the high costs of transporting inmates to other Iowa jails. Why the county cannot transition from one solution to the other is unclear.

When reduced to its most basic state, the controversy surrounding the Justice Center looks like a series of frustrating Catch-22s: We imprison too many people, for example, but the best way to reduce that number may be to increase our capacity to try people. The Justice Center would provide a solution to a messy problem, but might in fact exacerbate its underlying causes. At the end of the day, we’re left with what looks like a tangle of paradoxes and the notion that maybe—maybe—the goals of the opposition and the plans of the county aren’t mutually exclusive after all.

Skaaren Cossé is an undergraduate at the University of Iowa studying Finance and International Studies.

Zach Tilly is an undergraduate studying Journalism and Political Science. He also writes for The Daily Iowan and the Washington Post‘s swing-state blog, The 12.