Hurricane Sandy’s ravaging of New York City and other parts of the eastern seaboard serves as a grim reminder of just how vulnerable our communities remain to natural disaster. The chaotic aftermath produced apocalyptic images of inundated streets, miles-long traffic jams and empty grocery shelves.
For some Iowa Citians, the floods out east hit home, too. Memories remain from the 2008 flood that forced evacuations of hundreds of homes and left Iowa City and the surrounding area paralyzed for days. Longer residents may also recall the devastation of the 1993 floods.

More than four years after the ‘08 flood, the Iowa City Council is in the midst of deciding on a flood mitigation proposal that would see the construction of an $8.1 million levee around the Idyllwild neighborhood and nearby Parkview Church, an area that was particularly hard hit by the past floods and remains vulnerable today. Data from the Johnson County Assessor indicates that property values sunk between 25 and 40 percent in the Idyllwild neighborhood as a result of the 2008 flood.

The proposal, which is the result of a study conducted by the consulting firm HDR Engineering, Inc., would place the levee along the Taft Speedway between Dubuque Street and Calibria Street, shielding the Idyllwild neighborhood behind an 8.5-foot wall.

What are we waiting for, let’s build a levee, right?

Of course, there’s more to it. Some residents have argued that while the levee would protect the recently developed condos that make up the Idyllwild neighborhood, the historical Taft Speedway homes along the river would remain in harm’s way. In fact, some have suggested that the levee would divert floodwaters and put the Taft Speedway homes and perhaps other areas downstream at even greater risk of flooding.

Clearly, this is no easy decision for the City Council. But controversial as it may be, the City Council must act soon because the project could be at risk of losing the urgent need designation necessary to receive the Community Development Block Grant, which will fund the construction of the levee. Confusingly, in order to know if the project will meet the urgent need criteria, the City Council must make a decision and submit it for review by the U.S. Department of Housing and Urban Development, which administers the grant.

So, is the project a worthwhile effort? A well-intentioned boondoggle? An evil scheme to protect Idyllwild at the expense of the rest of us?

Concerned citizens, mark your calendars: the levee issue is slated for a vote at the November 27 formal meeting.

Despite previous opposition from Des Moines, a plan to bring an Amtrak line to town is dancing upon the lips of Iowa City train-enthusiasts again. A feasibility study to be completed soon by the Iowa Department of Transportation is expected to recommend a new route through Omaha, Council Bluffs, Des Moines and Iowa City, in the case that Iowa’s political tides shift in favor of the extremely generously-named “high-speed rail”.

Amtrak—the federally subsidized passenger train system and national embarrassment—currently operates two remarkably inconvenient lines in Iowa. One bisects the southernmost reaches of the state between Omaha and Burlington; the other makes a brief cameo in southeast Iowa on its way between Chicago and Kansas City. The relative inaccessibility of passenger rail in Iowa has train advocates in some Iowa cities straight up yearning for a new Iowa line. 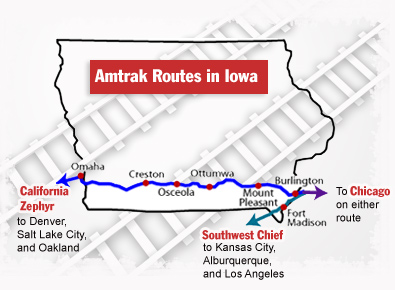 Iowa City is one such pocket of support for the embryonic plan. According to the City Council’s 2012 statement of legislative goals, the council unanimously supports the extension of an Amtrak line from the Quad Cities to Iowa City. Problem is: Governor Branstad has made political hay out of pinching the necessary pennies to block Iowa’s adoption of rail transportation.

Two years ago, Iowa and Illinois received $230 million from the federal government to partially subsidize the construction of a $310 million railway between Chicago and Iowa City, but the plan fell apart when Fiscal Patriot Branstad took the reins and made it abundantly clear that he would not use state funds to put up Iowa’s share of the construction and maintenance costs.
Iowa City Mayor Matt Hayek wrote Branstad in 2011 to make the case for Amtrak—it would lead to economic development in Eastern Iowa—but it didn’t work.

The conflict surrounding the future of passenger rail in Iowa raises the question: is this even worth the trouble?

The primary arguments offered by both sides are economic. On one side, Branstadians argue that subsidizing Amtrak is just more wasteful big government spending; on the other, Hayekites maintain an unflappable gee-whiz faith in the economic benefits of 60-miles-per-hour train travel.

The economic case for bringing Amtrak to town is undermined by the company’s finances. In 2011, Amtrak took in $2.7 billion in revenue, but spent nearly $4 billion. Though Amtrak operates as a for-profit corporation, it is kept afloat by a considerable federal subsidy. This points to two economic problems: (1) in order to achieve net-positive economic effects in a given place, Amtrak has to first offset the cost of its subsidy and (2) Amtrak’s inability to turn a profit indicates that the market for train travel is quite weak.

In 2011, with one existing Iowa line, Amtrak’s direct contribution to the Iowa economy was negligible to say the least. They pumped only $681,000 into the state to pay the salaries of its three Iowa-based employees and purchase a few “goods and services.” Hardly an inspiring stimulus.

It certainly seems as though claims of overwhelming demand for Amtrak and its potential economic impact are a touch overblown. Sure, it would be cool to be able to hop on a train and head over to Chicago or Omaha, but it’s important to remember that the train would be slow, empty and expensive.

Before we begin making eyes at passenger rail all over again, let’s remind ourselves that Amtrak is not the prettiest girl at the ball by a wide margin.

Skaaren Cossé is an undergraduate at the University of Iowa studying Finance and International Studies.

Zach Tilly is an undergraduate studying Journalism and Political Science. He also writes for The Daily Iowan and the Washington Post’s swing-state blog, The 12.