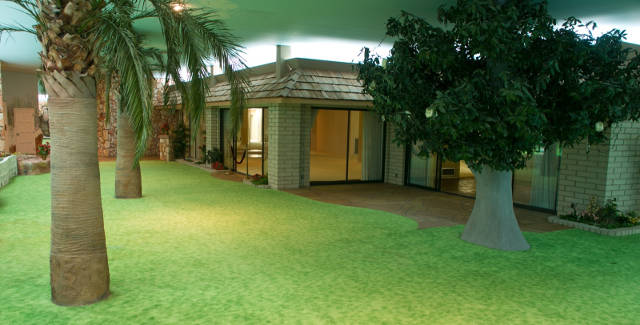 If you’re looking for a 15,000-square-foot luxury home that’s built 26 feet underground so it can survive a nuclear attack, and you have a spare $1.7 million, we’ve got just the place for you! Built in 1978 by a wealthy businessman who was convinced the Reds were going to push the button down, this Las Vegas house has two bedrooms (and one extra in a “guest house”), a huge front room suitable for go-cart racing, a marble tub worthy of Liberace, and acres of pink tile. Oh, and there’s another two-bedroom house up on the surface, too. Casa Apocalypse is in what’s essentially a super-sized basement with green carpet “grass” and fake trees, as well as a swimming pool, hot tubs, and a wraparound mural “landscape.” You could curl up on the couch, warm up some MRE’s, and watch The Day After … or just Ronald Reagan speeches on endless loop. If nothing else, it would be a hell of a place to shoot a movie about some crazy loon living in an underground house waiting for The End.

The basics, courtesy of Messy Nessy:

The house was built in 1978 to withstand a nuclear blast by an arguably ‘paranoid’ wealthy businessman, Girard “Jerry” B. Henderson. The ambitious homeowner made his fortune with several companies including Avon cosmetics and Gulfstream Aerospace Corp. In 1964, he tried his hand at another business venture and formed his company, ”Underground World Homes”. Convinced that things with the Soviets weren’t going to end well in the Cold War, Henderson tried pitching his vision of underground living to America. At the New York World’s Fair in the mid sixties, his company sponsored the exhibit, “Why Live Underground”. But if Henderson was going to wait out the end of the world underground, he was going to do it in style.

And talk about style! There’s 70′s décor with a vengeance on the inside — hope you like pink! — and the “exterior” is like a set from some deranged precursor to The Truman Show. We especially love this shot of the putting green and (empty) swimming pool: 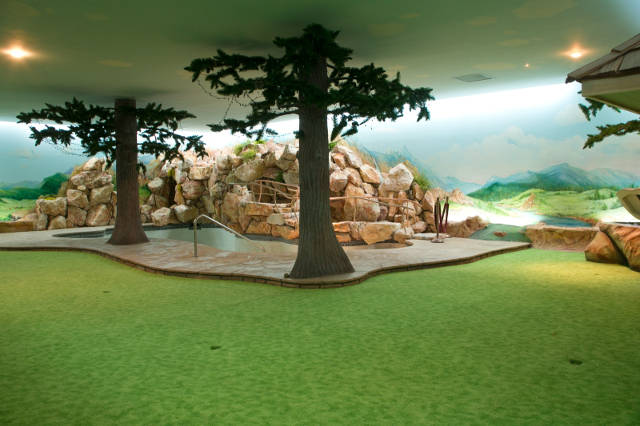 And you can even set the lights to simulate different times of day, including “night” with twinkly stars set in the ceiling.

The Las Vegas Review-Journal has a lovely video tour of this nuclear-age dream/nightmare home:

We’re not sure we’d want to live here. Reminds us just a little too much of that Ray Bradbury story, “There Will Come Soft Rains” (read here by Leonard Nimoy), which freaked us right the fuck out back in high school, when this house still smelled of new paint. But if you do decide to visit, at least we can suggest a soundtrack: