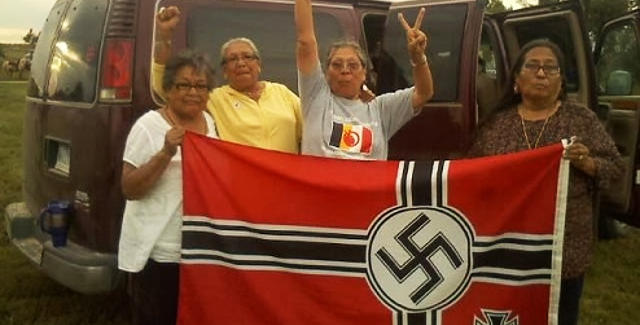 The plans for a neo-Nazi paradise in Leith, North Dakota, are running into a few speedbumps, it seems. As we noted a while back, white supremacist Craig Paul Cobb has been buying up a passel of abandoned properties in the town of 19, hoping to get enough like-minded bigots to move in and take it over. The existing residents are not one bit happy about it. Nor are other North Dakotans, including the Lakota and Dakota grandmothers pictured above, who according to the Last Real Indians blog “captured and burned” a Nazi flag from the town while a group of several hundred Native Americans and others protested the neo-Nazi presence in Leith last Saturday. We advise the White Power Rangers to recognize when they’re beaten, and to not piss off the grannies any futher.

Leith is near the Standing Rock Indian Nation. Dakota protester Phyllis Young gave the neo-Nazis a good rhetorical wag of the finger:

“You are in Dakota territory.”

“Lakota means allies, Dakota means peace, and that is what we continue to struggle for in this land.”

“My uncle stormed the shores of Normandy to eliminate your forerunners, the Nazis, that killed millions all over the world, so we know what your intent is, to criminalize Dakota territory.

“You will not do it. The grandmothers will stand up to you. The women will take you on.”

Chase Iron Eyes said that the neo-Nazis “represent a dying cause.”

“You have nothing. That swastika is even our symbol.”

“You have appropriated our intellectual properties because you have none.”

In addition to the opposition of locals and the wider North Dakota community, Cobb and other new property-owners in Leith have another serious issue: Poop.

An order giving white supremacist Craig Cobb five days to come up with a plan for installing running water and a sewer outlet into his home in Leith expired Monday and it’s possible the house could be declared uninhabitable.

The order was written by the Custer District Health Unit’s environmental health practitioner Aaron Johnson, who said Cobb owns two other structures in town that possibly will be removed next month.

Cobb is believed to be using an outhouse on the property, and has said that he buys bottled water for drinking and washing. Depending on advice from the Health Unit’s attorney, the unit could issue an order declaring the house uninhabitable or take Cobb to court. The other properties purchased by the neo-Nazis are in similarly sad shape; one was in the process of being condemned even as Cobb sought to sell it to a supporter.

Let’s have a round of applause for zoning and sanitation laws, part of a functioning civil society. Oh, also, we strongly condemn the theft and destruction of private property like Nazi flags. Theft is wrong, and not even wonderful angry grannies should do that, even when it’s awesome (yes they should).