Renowned primatologist Jane Goodall gave a lecture at the Carver-Hawkeye Arena on Monday, March 10, in Iowa City, as part of the University of Iowa Lecture Series. Dr. Goodall is best known for her breakthrough research in Tanzania, revealing that chimpanzees use tools, engage in warfare and have distinct personalities, thereby redefining conceptions of ourselves and other animals. Currently, Dr. Goodall dedicates much of her time speaking around the world and growing the Roots and Shoots program, which engages youth in over 130 countries in social, animal and environmental action.

It’s 6:45 p.m. when I enter Carver-Hawkeye, and the place is already packed. Maneuvering through the crowds, I walk down to the stage, as close as I can get before security tells me to stop, and I find a lone seat beside two college students. The couple tells me they’d arrived at 6 p.m., by which time most of the front seats had already been claimed.

A presentation drifts between images of old Jane and young Jane, Jane standing before a mountain, Jane hugging a chimpanzee. I read that only 300,000 chimps are left in the wild, that their biggest threats are deforestation and illegal hunting of bushmeat. A lively African song fades into a sparkly, enchanted melody, like something out of a Disney movie, and the disembodied voice of Jane Goodall fills the room. “I dreamed of going to Africa. Then, one day, it happened…” 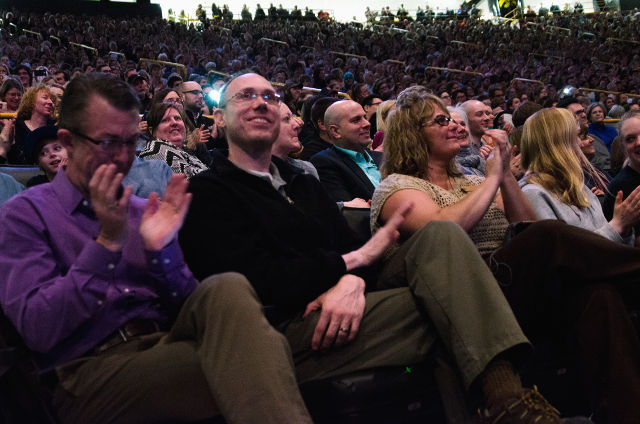 I turn around to scan the audience, and by now the nine sections between “JJ” and “K” are solid. There are so many children here, and I try to remember the first time ever learning about Goodall. My neighbor to the left says she became fascinated by Goodall in elementary school, had read her books in middle school and had even researched Goodall’s academic career to help decide on a college major.

After a 15-minute delay due to traffic, the lecture finally begins. Applause erupts. Introductions are made. Goodall enters the stage, and 5,000 people stand to welcome her.

Accompanied by a stuffed monkey (not to be confused with a chimpanzee) named Mr. H and a stuffed cow named Cow, Goodall greets us with a pant-hoot—the loud cry that chimps make to identify themselves. Kids in the audience echo back with calls of their own.

She tells us about her mother, who never crushed her curiosity, and she recounts her early fascination with animals, bringing earthworms into the house, observing how chickens lay eggs, reading Tarzan of the Apes. As a woman, she faced criticism for dreaming of Africa—the “dark continent” as it was then called. She describes working for paleoanthropologist, Louis Leakey, and following him into the Olduvai Gorge, encountering rhinos and lions, sleeping in tents crawling with centipedes and reading every book possible on the animals of Africa. Finally, Goodall tells us about studying the chimpanzees, which lead to her breakthrough discovery that they, like us, use tools and have their own, unique personalities.

It was only a matter of practicality that Goodall entered academia, having the foresight to realize that obtaining grants would be easier with a degree. She became one of only a handful to earn a PhD without first receiving a BA. But, at Cambridge, the professors scoffed at her. They said it was ludicrous to think that animals felt emotion or had intelligence. She knew they were wrong, though, having been taught otherwise by her childhood dog, Rusty.

Goodall tells us funny anecdotes to illustrate just how little we know about the autonomy and intelligence of other animals. We learn about problem-solving crows at Oxford and a stealthy octopus in an aquarium. Even so, she says, it’s hard to convince people of the tremendous intellectual and emotional complexity of nonhuman animals.

Then, Goodall turns to problems in Africa today. Deforestation, the slaughtering of chimps, multinational companies ravaging the land, poverty. She talks about the unspeakable cruelty toward animals in farms, the chemicals sprayed onto fields that sicken people and the environment, the greed of the fossil fuel industry. “We need money to live,” she says, “but it’s a problem when we live for money.” 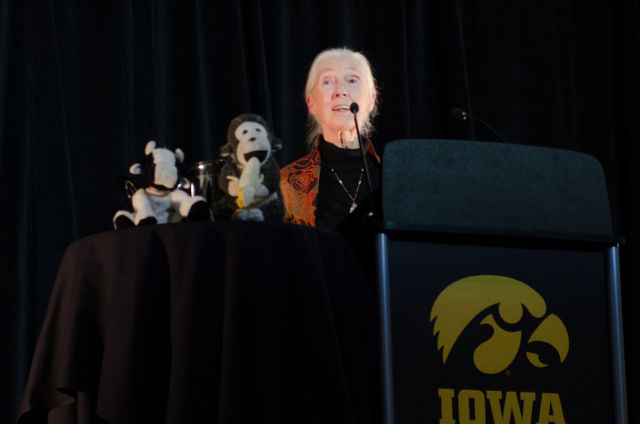 And when all seems hopeless, she lifts the audience back up. We learn about the conservation and social justice work of the Jane Goodall Institute. We learn about Roots and Shoots, a network of youth all over the world making a difference for people, animals and the environment. Goodall lists her reasons for hope: the drive of young people, the human genius, the resiliency of nature and the indomitable human spirit. “You can’t change the world,” she warns, but if we divide the world into jigsaw puzzle pieces, and if we all work in our own little place, only then, collectively, can we change the world.

When the lecture ends, the exits are jammed with bodies. People stand in a long, clumpy line, waiting for signatures.

I wonder what can be done in the jigsaw puzzle piece that is Iowa. We have polluted rivers, industrial agriculture, GMOs, factory farming, the near-disappearance of the monarch butterfly migration, greenhouse gas emissions from coal plants and cars. Instead of gazing out into the far-off distance, into the exciting and exotic wilderness where chimps and lions and rhinos dwell, we must recognize the importance and value of doing work in our own backyard.