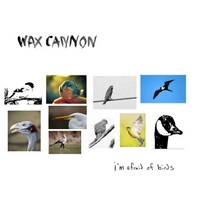 Wax Cannon is Dave Murray and Jay Miller, who are two regular guys who work at the UI hospital. I mention their day jobs because the music of Wax Cannon is their avocation, a project they’ve been pursuing for the last 14 years. This album finds them exploring the same sonic landscape of guitar-and-drum pop, though they really are unlike any of the currently trendy two-piece outfits. Their sound owes more to pre-Nevermind indie rock than to the revisionist bombast of the Black Keys or White Stripes.

Imagine a perfect playlist from KRUI circa 1987—REM, Replacements, Husker Du, Pixies, Jesus & Mary Chain, Dinosaur Jr., Sonic Youth—and you will get close to what Wax Cannon are about. But there’s nothing nostalgic about these guys. I’m Afraid Of Birds is—except for Murray’s “Bad Handsome”—a vehicle for Jay Miller’s songwriting, which exhibits an abiding affection for thick chords and songs that teeter between major and minor modes. On this album there’s some overdubbing to build up the sound, but if you ever hear them play live (highly recommended), Jay has no trouble creating a whole band’s sound just by plugging in and cranking his Vox amp to 11. He is aided and abetted by Dave’s ability to abuse his drum kit a la Keith Moon.

Lyrically, Jay tends to combine cryptic surrealism with the cadence of everyday small talk: “Have you ever ashtrayed? You ever been confused? Are you back on mornings? I am not amused,” he sings on “Lazy Cakes.” On past records Jay has purposely buried the vocals (a hallmark of the ’80s sound), sometimes to the point of refusing to reveal the actual lyrics to Dave. But I’m Afraid Of Birds is more transparently produced, bringing the words to the fore.

Still, the meaning of the words remain less important than the rhythm and sound they make: “I don’t care actually, haven’t seen anyway, loaded arms they won’t trade, they won’t hook, they aren’t made, you’re at ease, you’re a cook, no one has suggested you would, to the truck explaining that they won’t move they’re too fat.” (“Arm Look Way”) What abides across all six (or seven?) of Wax Cannon’s albums is that they combine easily accessible (if ineffable) emotional impact with a private vocabulary that resists easy analysis. Most music you hear comes apart easily into its constituent parts; Wax Cannon seems to be solid all the way through.