Trent Ryan is a Hawkeye basketball fan; self described as a chubby-faced blogger who eats Hy-Vee Chinese by the truckload. The English major writes about his love for the Hawks, among other things Iowa at Flyover Sports. Three days ago, Ryan was using the platform to sell his well-received ‘Fran Face’ shirt, which went viral thanks to a tweet from @FransRedFace on Saturday. 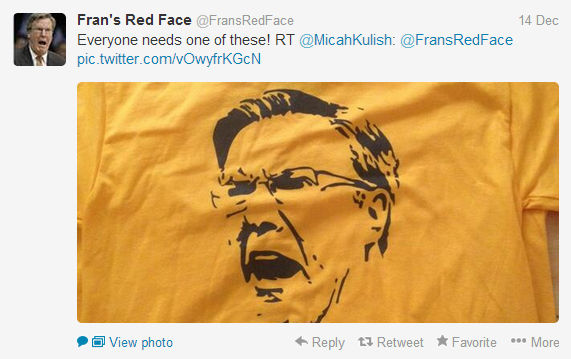 In typical self deprecating manner, Ryan gives himself the proverbial slap in the forehead on his blog.

“When we decided to make Fran Face shirts, we tried to think of many different ways to market the shirts. At no point did we say, ‘Hey, maybe we should tweet the shirt to the guy whose Twitter account is dedicated to Fran McCaffery,'” he wrote.

Despite the marketing lapse, @FransRedFace found the Fran Face and the shirt became a hot item. Ryan says the next 16 hours were spent keeping up with orders; the retweet prompting hundreds of sales. Cedar Rapids Gazette sportswriter Marc Morehouse got in on the Fran Face movement, also sharing Ryan’s t-shirt with 14,000 + followers.

Ryan calls himself a lifetime Hawkeye basketball fan revitalized by McCaffery’s program. He bounced the t-shirt idea off a friend in graphic design, collaborated on the drawing and ordered prints. He proudly rocked the Fran Face in Ames, days later, during the Iowa-ISU basketball showdown.

“I thought it was a great idea to generate support for the basketball team,” said the college Senior. It was a lot of fun until they shut us down.”

The cease and desist letter came Monday, December 16. On behalf of Fran McCaffery, the University of Iowa requested Ryan discontinue production of merchandise bearing likeness to the head basketball coach. The letter goes on to explain that McCaffery himself hopes to keep focus on the team, rather than him as an individual.

Honorable stance by the head coach? Sure. Truth worthy? Hardly, according to Ryan’s response to the University of Iowa:

“There’s no way Fran McCaffery cares that we made shirts or has any idea the shirt even exists. This cease and desist order is coming straight from Trademark & Licensing because we were making money and they weren’t.” Ryan said.

Those lucky enough to order a Fran Face before the University shutdown, now own a rare piece of Hawkeye memorabilia. No sign of the Fran Face on EBay. Yet.

Ryan says he will comply with the order, keeping a positive “fun while it lasted attitude” attitude.

“It boils down to a few things,” Ryan says. The University has money and lawyers. I have a laptop and student loan payments.”

No word on whether a licensed Fran Face shirt will be available for purchase this basketball season.