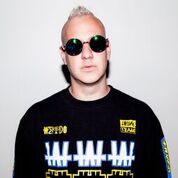 Fresh off of a new record deal with Mad Decent, Twonk-originator Brillz is touring the country showcasing his new material. His first album for the label, the EP Geekin, dropped in October. Brillz’s earlier albums, Twonk and its remixed follow-up, both broke the top 10 on the iTunes dance charts.

Along with supporting acts Party Favor, Ghastly and Infuze, Brillz will bring his TWONK Di NATION tour to the Blue Moose Tap House in Iowa City tomorrow night. Little Village is partnering with the Blue Moose to offer a chance to win a pair of tickets to the show. To be entered to win, share the Facebook event using the hashtag #BrillzatBlueMoose. The winner will be notified and can pick up their tickets at the door tomorrow night.

The cast of ‘Napoleon Dynamite’ is coming to Cedar Rapids