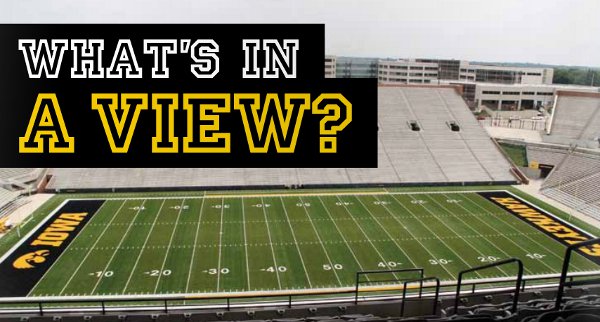 Saturday, Sept. 24 marked my first foray into an echelon of sports-reporting I’d previously only dreamed of: a seat in the Paul W. Brechler Press Box. (Did you know it was named for Paul Brechler, who at the ripe young age of 36 became the youngest director of athletics in Hawkeye history? True fact!) I was given the privilege of witnessing the Hawks trounce Lousiana-Monroe on our home turf, far above the madding crowds of Kinnick.

I arrived in style, on the free shuttle to Kinnick. It was a raucous ride, as it should be. Our driver psyched us up and we paid him in rousing renditions of “In Heaven There is No Beer” and the Iowa Fight Song.

Once my chariot arrived, I veered toward the entrance marked “Press” and squeezed into elevator F for the fourth floor. The doors slid open and there stood a man whose sole job appeared to be to encourage all who entered to “Enjoy the food!” Food? Sweet! Cautiously, I peeked in.

Rows of seats descended into a wall of glass overlooking the field. A muted, reverential hush prevailed. Groups of silver-haired men bent their heads together; flushed food-service workers sat out ketchups and mustards; reporters buzzed in their hives.

The view was glorious, encompassing all of creation, from endzone to endzone. It was like I was in the blimp. Most of the seats lining the windows were filled with reporters clicking away on their laptops. All I’d brought was a notepad, a pen and a smile.

With a little help, I located my spot beside a journalist from Hawkeye Insider, decked out in red and white West Branch gear.

“Why is it so quiet in here?” I whispered.

“Is this your first time in?” he answered, peering at my media pass. “Just so you know … there’s no cheering. I’m serious. They’ll warn you once, then they’ll kick you out.”

Crap. No cheering? What in the hay? What was I supposed to be doing up here? (I know, I know …)

The field erupted with color and motion as our boys rushed out of the southwest corner of the end zone, flying their flags, stampeding the turf. I sucked in my breath at the sight of row after row of black and gold and green (a touching tribute to former Safety Brett Greenwood).

I’m used to watching the Hawks with my friends, saying whatever silly thing pops into my head and enjoying an easygoing atmosphere of chili and beer. Not so in these fancy new digs. My neighbor to the left felt the need to predict nearly every play before it happened, punctuating each correct prediction with a “Did I call it?” He also seemed to be on a mission to prove that I didn’t know a thing about football–throwing out facts and stats like a regular Gary Dolphin.

He was right. Compared to his encyclopedic knowledge of each and every player’s history, hometown, heck, I dunno, favorite breakfast, I was an amateur who obviously didn’t deserve her seat. At one point, he asked apologetically if I’d ever been to a game before.

Eventually, I decided not to let him or anyone else bother me. Hells bells, I had the best seat in the house! I could actually see the shapes the band was forming on the field (a fedora! A tiger hawk!) I learned to mimic the hushed “oohs” and “aahs” that a standout play elicited from the press. I asked my questions, gathered my impressions and I didn’t give a hoot how uninformed I looked scribbling into my notepad.

“You don’t have to write stuff down, you know” Hawkeye Insider confided. I nodded in agreement and made a quick note about his windsuit.

In the press box, there are free hot dogs and chicken sandwiches and brownies. There is iced tea and pop and coffee. But in the stands there are happy, cheering, squished-up fans … a frenzy of painted stomachs, tiny human replica cheerleaders, old guys with palm-sized TVs listening to the game in their earbuds. Given the choice, it was becoming more apparent where this Townie would rather be.

The game progressed swimmingly. After each play, a gentle, airline pilot voice came over the loudspeaker announcing who was involved and what had occurred. After each quarter, ladies handed out with stat sheets. It was one smooth, impressive operation–Hawkeye Insider was right! I really didn’t have to write this stuff down.

Toward the end of the fourth quarter an announcement was made: Those of us who wanted to head down to the locker room should meet at the elevator in ten minutes. “Oooh, the locker room!” I thought. I turned to my neighbor, “Are you going down there?”

“No, I’ll head to the sideline early.”

My eyes lit up. The sideline!

“Uh … they’re pretty strict about who they let down there,” he said, giving me a look that meant “and I kinda doubt that’s you.”

I looked down at the media pass dangling from my neck. “Access to sideline” it read. Huh. Whatever. I let him leave, then followed another crowd of reporters down to the field.

I was on the sideline! Huzzah! I turned and looked up at the crowd above me, the children hoisted on their fathers’ backs, the full-volume hoots and hurrahs, a wall of waving arms and fists, of celebratory smiles–it was breathtaking. I locked eyes with the Hawkeye Insider a few feet down the sideline and gave him a happy little wave.

In the end, the day’s experience offered a peek into the lives of the real, working press. Catered food. Non-stop Twittering. Hanging out on the sideline. Just a day in the life, folks … move along.

But as for this Townie, I prefer to keep my feet on the ground, reporting my impressions of the season from a bar’s eye view, rather than a hawk’s. I’m grateful for the opportunity, but felt about as out of place as a lineman roaming the field in a ball gown. The press box is no place for giggling, and that happens to be one of the things I do best.

For now, I’m prepared to meet the coming months secure in my seat at the Deadwood, the game analysis of friends ringing in my ears, a satisfying victory yodel rising uninhibited to the dusty rafters, up through the wilting Halloween decorations, out the squeaky door and into the streets. A cheer that doesn’t stop until it collides with a thunk into the gilded, glassed-in confines of the Paul W. Brechler Press Box.