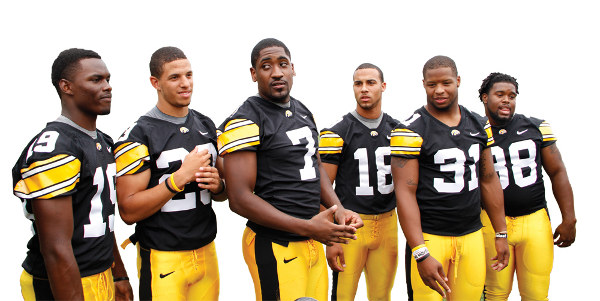 Some say previews are for people who didn’t pay attention last year but, like so many of you, my memories of the the 2010 season must break through a thick layer of boozy scum before bubbling to the surface.

As I dredge the murk of memory, I peer through a fog of autumn days spent grinding my tilted chair into the sticky-slick carpet of the Deadwood Tavern, craning to catch each crash of bodies, each slashing run and sweep of line. Yet, very few standout memories emerge. I do remember the awesome, slightly guilty feeling of squashing one of earth’s most lovable living, breathing football legends, Joe Paterno. For a moment I remember losing to a bunch of wannabe Ivy Leaguers from Chicago–again!–but then my mind goes blank. In fact, try as I might, there is absolutely no recollection of the last three games of the regular season. I do recall sighing in relief and redemption after a convincing win at the Insight Bowl, but I don’t remember who we played.

Yes, when it comes to seasons like last year’s, your Townie Hawk would rather not dwell on the past. However, you may be surprised to note that I have actually done a little bit of research in order to prepare us all for future football frenzy. What I’ve uncovered marks 2011 as one of the more intriguing Hawkeye seasons in recent memory. 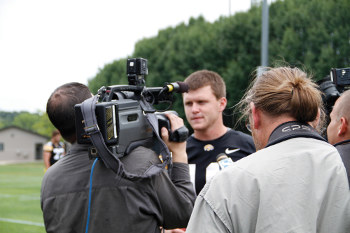 The easiest thing to say about the upcoming season is “Who knows?” But, like an early-arriving Christmas package, the new-look Hawkeyes, with their depth chart full of mysteries, are thrilling to ponder, fun to unwrap and well worth diving into.

Junior Quarterback James Vandenberg is entering his first year as a starter, but we’ve caught glimpses of what he is capable of. He showed great potential stepping in for an injured Ricky Stanzi at Ohio State in 2009, where–if Head Coach Kirk Ferentz had not taken the ball out of his hands, opting instead to go into overtime–he might have marched down the field and given us the win and a chance at a Big Ten title.

Still, Vandenberg remains an unknown quantity. It helps to know that he will have some great help, starting with the protection of a solid, experienced offensive line. Lead by the two-pronged tornado of Tackles Riley Reiff and Markus Zusevics, this year’s line is widely predicted to be one of the Big Ten’s best.

I love the gritty “four yards and a cloud of dust” style the Hawkeyes are famous for, but I’m optimistic about Vandenberg and I want to see him put it in the air. A lot. Aside from o-line protection, the best way to build a great passing game is to keep the defense on its toes with a consistent ground attack. Here, we look forward to the rumbling return of starting Running Back Marcus Coker, perhaps as smart and efficient a runner as we’ve seen since Shonn Greene. As for backups, we might not know anything about them yet, but let’s remember that at this time last year nobody had ever heard of Marcus Coker, who ended up averaging a solid 89-yards-per-game and taking home MVP honors at the Insight Bowl.

From the ranks of receivers rises this year’s biggest Hawk star, Marvin McNutt, of “McNutt in the endzone” fame. While Vandenberg is said to have stepped into the leadership role quite well this spring, McNutt is our most experienced offensive player and his loose, jocular style is sure to keep our boys cool when the competition gets heated and the pressure builds. This year, he needs just five touchdowns to equal Iowa’s career record and that’s a bet you’d be a fool not to take. His counterpart, Junior Wide Receiver Keenan Davis, may not be a big name yet but as secondaries attempt to double-team McNutt, Vandenberg will be looking for Davis to exploit the holes created. If he’s got the sure-grip of every good Hawkeye, look for him to help keep those defenses honest–honestly confused.

Feeling good and optimistic offensively, let’s turn our attention to the other side of the ball. Iowa fans love a great battle in the trenches, so I’m sure all my fellow Hawkeyes will be glad to know that we are looking just as solid up front on defense as we are on offense. Sure, we lost some big-name starters, but Mike Daniels, Broderick Binns and Lebron Daniel each saw action in all 13 games last year. They are primed and ready to step into the limelight, using their experience to cork the big defensive holes left by Adrian Clayborn, Christian Ballard and Karl Klug.

As for the secondary, while many Hawk fans are bemoaning the loss of Iowa-boy Safety Tyler Sash and his nearly 400 yards of interception returns, this Townie Hawk is looking to the corners, where experienced defensive backs Shaun Prater and Micah Hyde are sure to be putting on pick-fests of their own.

But I’m making this all sound good. The truth is we don’t have the most experienced squad, but that’s what’s great about college football; it’s impossible to build a dynasty based on any particular group of players because no one is there for more than four years. You are almost always losing someone, and at the same time, picking up a yet-unknown player that could end up a dud, or could become a star.

Instead of dynasties, we have traditions. We have mentors that are hardly more experienced than the apprentices. We watch totally anonymous boys trot onto the field and, depending on what they do, either stay anonymous or become national celebrities, right before our eyes.

Perhaps our quiet leader, Coach Ferentz, summed it up best in his media day remarks this August: “I think back to 2008, when Ricky Stanzi and Pat Angerer both started the season as second team guys. By the end of September they had emerged as starters and the rest is history. They both went on and had great careers. I think it is realistic to think we might have some stories like that this year.”

A few months ago many of these guys were in high school. They worked hard and got their first taste of glory when they saw their names on the final roster–just finalized in August. They stepped up from the ranks and proved themselves worthy to wear the Black and Gold and I look forward to watching what happens next. Who are they, this next generation of Hawkeye heroes?

The hour is upon us. It’s fall and we love it; the temperature is an automatic call for celebration, the sun-singed trees along the banks of the Iowa River crackle as we cross to Kinnick. Let’s don our bumblebee sweaters, our foam corn heads and TigerHawk decals and get this party started. Here’s to the story, to the Penn State fans weeping in the stands, to Lou Holtz picking the Irish and Lee Corso’s supertan head blazing on your TV every Saturday. Here’s to the parking lot packed with tailgaters, the Big Ten’s best marching band (coming soon to a bar near you), the cheerleaders and the chest painters and the kids who cry when Herky tries to hug them. Here’s to a glorious season of football and to the unfolding of another great year in Hawkeye history.