Film Screening and Q&A: The Yes Men Are Revolting

Using humorous deceptions to get their political points across, the Yes Men have regularly made headlines since they joined forces in 1999. Today, Mike Bonanno and his partner in crime, Andy Bichlbaum, bring their mischievous brand of activism to Iowa City for an action-packed day of free events.

At 3 p.m., The Bijou will host a free screening of their latest documentary, The Yes Men Are Revolting, followed by a Q&A with Mike and Andy. Tonight at 7:30 p.m., they will give a free talk in the IMU’s second floor ballroom titled “Making Meaningful Mischief,” sponsored by the University Lecture Committee.

The Yes Men first made a big splash in 1999 with a George W. Bush parody site, gwbush.com. They duplicated the layout of Bush’s campaign site and filled it with slogans like “Hypocrisy with Bravado.” The parallel universe political page invited people to engage in acts of symbolic subterfuge, like inserting “slaughtered cow” plastic toys into Happy Meals or jumping the fence into Disneyland and demanding political asylum.

Commenting on his doppelganger site, candidate Bush was frighteningly candid: “There ought to be limits to freedom.” His reaction vividly demonstrates the pedagogical possibilities of pranks. Their little lie exposed George W. Bush’s true feelings not long before he began dramatically chipping away at civil liberties as President.

The Yes Men grew more ambitious after registering the Web domain name GATT.org. The General Agreement on Tariffs and Trade, or GATT, was a treaty governing international trade that was replaced in 1995 by the World Trade Organization (WTO). Mike and Andy set up a website that copied the graphic design and repeated the rhetoric used by GATT and the WTO—with a few glaring differences, of course. 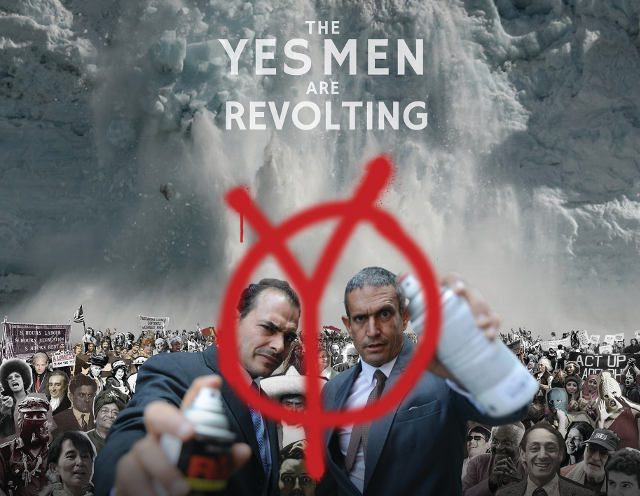 Some credulous visitors read straight through the satire and sent emails with speaking invitations. For instance, the organizers of the Textiles of the Future Conference in Tampere, Finland needed a WTO representative to deliver a keynote address, so in August 2001 the merry pranksters flew to Scandinavia.

Posing as “Dr. Hank Hardy Unruh of the WTO,” Bichlbaum delivered a speech that used terms like “market liberalization” to favorably compare sweatshops in developing countries to slavery. In a subsection of his speech, titled “British Empire: Its Lessons for Managers,” Dr. Unruh dismissed Mohandas Gandhi as “a likeable, well-meaning fellow who wanted to help his fellow workers along, but did not understand the benefits of open markets and free trade.”

Bichlbaum explained the gist of the textiles conference presentation to me. “While the workers have to remain back there, the managers have to remain here,” he said. “They don’t want to go to those places. That’s a problem, how do we solve it? Here’s this hands-free surveillance mechanism that allows interaction and surveillance with your workers. And we called them slaves, basically.”

What exactly was this “hands-free surveillance mechanism”? As was documented in the first Yes Men movie, Mike removed Andy’s tear-away business suit to reveal a gold body suit with a giant, shiny inflatable phallus that contained a video screen. None of the international scientists, businesspeople, officials, and academics seemed to blink; they just politely applauded. 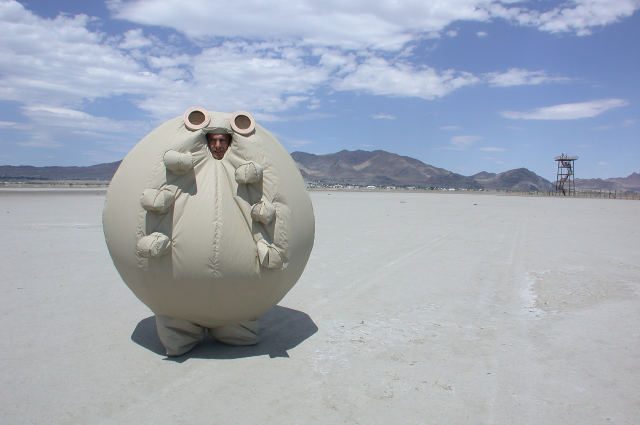 Even after this stunt—and after the Yes Men movie was released to widespread acclaim—they kept getting invited to speak as WTO representatives. “The Wharton School accidentally invited us speak at that business school after stumbling on our site,” Andy said.  “It was for a conference on Africa, on business in Africa. So we went and talked about how we needed a new model of labor for Africa.”

In that talk, the Yes Men discussed the three phases of business in Africa. “First, there was the triangle trade,” Andy said, referring to slavery, “which was great for business, but not so much for Africans.” They then discussed colonialism, which also was good for business and bad for African workers, as was the third phase, the free market.

The Yes Men then soberly explained that we need to bring back the ownership of human beings in Africa so that workers can be properly taken care of by benevolent stewards. “This talk went on for twenty minutes, and people asked questions, but there was no mass outrage,” Andy said. “They asked questions, and there were some really prominent people there, like from a big bank in Africa.”

“We brought along our friend Jack,” he continued, “who is very black, and he just stood off to the side silently. He’s a dancer, so we had planned that if there was a lot of outrage he would do a ‘friendship dance.’ But it never came to that because they never reacted.” A couple audience members did get it and came up to them afterwards saying that it was really funny, but most were unfazed by their presentation.

Yes Men actions often follow the same template: outrageously caricature an opponent’s position, document the performance, reveal their trickery in a press release, and spark a public discussion. Although Andy Bichlbaum likes to use the term “clownery” for what the Yes Men do, he is uncomfortable with the word “prank.”

“The thing that bothers me about the word ‘prank’ is that it’s something like what you would play on your kid brother.” In other words, it’s something you might do in a fun-loving way to someone you like. This is certainly not true of the Yes Men’s corporate targets. “They’re strictly our opponents. If we do something, like a ‘prank’ on the WTO, we’re not trying to be nice,” he laughs, “or pleasant or friendly.”

“We don’t ever want to be friends with the WTO. They are our opponents, and we want to use this thing that we’re doing—this bit of clownery—to draw the broader public’s attention to the WTO so that we can build to a point where we can change things.”

This article was originally published in Little Village issue 182