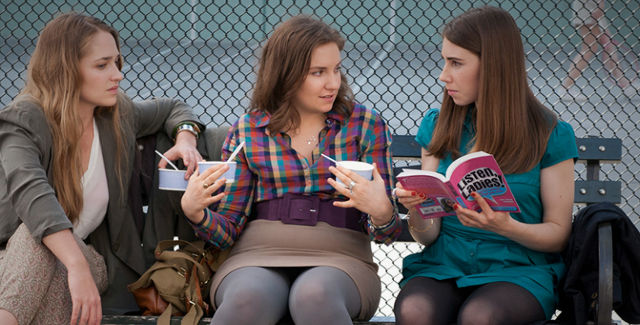 I’m continually amazed at how Iowa City, as a community, is both full of pride for its many fine qualities, and at the same time insecure enough to jump on any moment of attention from the outside world as a sort of validating life-line. We all desperately want the world to know that we’re here. When the famous people whose images are piped into our home via satellite notice Iowa City, we’re all giddily atwitter. And a-Twitter as well, if you will.

HBO wrapped up its third season of Girls Sunday night with the news that the protagonist Hannah Horvath (played by series creator and head writer Lena Dunham) was accepted into the Iowa Writers’ Workshop. And Iowa City — or at least the local paper and Facebook commenters — lit up like a Christmas Tree.

The Press-Citizen has run no less than six different articles on the topic since Sunday. The director of the workshop, Samantha Chang, was interviewed in Variety. Facebook blew up with links to all the various articles, and Iowa Citians took the time to add their perspectives.

You know who wasn’t coming to the party? The University of Iowa. First, the university’s go-to spokesperson, Tom Moore said, “While we are pleased that the Iowa Writers’ Workshop is receiving national attention and that our graduate [one of the show’s writers is an IWW alumnus] is doing well in her career, our general practice is to not allow filming, due to potential disruption to campus.”

Then, today, a more senior university spokesperson, VP for Strategic Communications Joe Brennan told the Press Citizen, “After reviewing the script, I felt the storyline placed the city and university in an unfavorable light, and considering the potential for disruption, I made the decision to deny the request. I won’t share details as I don’t think it fair to reveal the plot in advance. I understand this is a popular show, but it’s my job to safeguard the reputation of the university.”

Mr. Brennan reflects what I perceive to be as a craven, fearful cautiousness that seems pervasive now in the upper ranks of the University of Iowa administration. It is the bureaucrat’s natural tendency to cover his or her own ass first, of course. At the university, everyone above pay grade 6 is an “at will” employee who, absent any contract, can be summarily dismissed. Usually the university president is somewhat insulated from that sword of Damocles by a contract, but our current president, Sally Mason, has been working without one for a couple of years now.

Girls is a show full of nudity, sex, rough language and toxic narcissism. I can understand Mr. Brennan’s reluctance to allow a show like that free run of the university campus. If any of the rock-ribbed conservatives that Governor Branstad has put on the Board of Regents were to see, for example, Hannah Horvath having awkward sex with one of her freshman rhetoric students in the railroad tunnel by the Iowa Memorial Union, heads would roll.

But the university, in its abundance of caution, is missing out on an opportunity. Girls would bring money into the local economy, and no matter what the wayward protagonist of the show gets up to, it could only burnish the university’s reputation. Besides which, if they can’t film at the actual University of Iowa, they can certainly film at the fake University of Iowa of their choosing.

Furthermore, do Mr. Brennan and the rest of the university’s administration actually understand what the school’s reputation is? At this point, if you ask any non-Iowan about the university, the thing that usually comes to mind is its designation as a top party school.

The Suits on the Pentacrest also seem to be unaware of the fact that Girls is fiction. No one who watches the show mistakes it for a documentary. Why are they so worried that a bunch of made-up stories would damage the school’s reputation? Have they, in their relentless mission to control perception of the university, lost track of how fiction differs from real life?

To me, this whole business is actually funnier than most of what happened on Girls’ third season. What’s funnier than scared bureaucrats, trembling in their Cole-Haan loafers, putting on their serious faces and saying things that are patently absurd?

Maybe Tom Moore and Joe Brennan should loosen their ties a bit, and go have a beer and a bump at George’s.