My father never made it to the war. Like many in his generation–he was born in 1923–he wanted badly to fight in World War II. Having learned there were only two standard eye charts used in induction exams, he memorized both, figuring he could read enough of the first row to figure out which one it was. The ruse worked. He joined the army, but he was honorably discharged partway through basic training and told “not to come back even if we are invaded.”

The exact events leading up to his discharge are lost to his memory and to a fire that destroyed a great many military records in Kansas in the 1970s. But he was not forgotten: at his funeral in 1981, some forty years after his short tenure in the Army, two military officials showed up with an American flag, a headstone and a hundred dollars. He was even offered burial in a national cemetery and the American Legion in Enosburg Falls, Vermont, where he is buried, still keeps a fresh flag at his grave, along with those of all the other veterans buried in that tiny town. 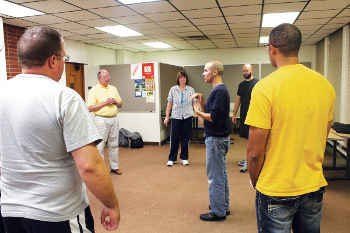 The military does a much better job than most of us at remembering and honoring the people who served, even those, like my father, who gave nothing more than a few weeks of their lives. As a society, we do not do so well. This month we have Veterans Day. Some of us will get the day off work. Most of us will notice that no mail is delivered that day. My grandmother will tell me about observing a minute of silence in her grade school classroom at 11:11 on November 11 for Armistice Day, as it was originally called. But even though we are fighting two wars, Americans won’t take more than that moment or two to remember, perhaps only noticing when they go to the bank or the post office or the library and find it closed.

This year, however, Iowa City area residents have a chance to do much more: They have a chance to hear from veterans themselves at Working Group Theatre’s latest production, called Telling: Iowa City. Nine actors, all of them veterans, will put on a performance based on the stories of many more Iowa veterans from World War II through the current wars in Iraq and Afghanistan.

This past August, Working Group Theatre and the UI Veterans Association interviewed dozens of veterans from Iowa. Working from those stories, playwrights Jennifer Fawcett and Jonathan Wei crafted the script of this production. Wei is a founder of The Telling Project, which has produced shows in Eugene and Portland, OR, Sacramento, CA, Starkville, MS, Washington, D.C., Seattle, WA and Baltimore, MD.

Whether or not you know someone in the service personally, you owe it to yourself to go and hear some of these stories. Performances are at 7:30 p.m. on Nov. 8-10 in Theatre B at The University of Iowa’s Theatre Building and Dec. 2-4 at Riverside Theatre.

Working Group Theatre is also soliciting more stories from veterans. To submit yours, or to read more, visit workinggrouptheatre.org and look for the links for Telling: Iowa City.

Have you missed the past two months of Was The Word, Working Group Theatre’s snazzy spoken word and music project? Fear not, there’s another chance to go this month on Nov. 20 at 7:00 p.m. The show will be in the Englert once again. You can watch excerpts and hear pieces from previous month’s shows at Working Group Theatre’s website.

The Cripple of Inishmaan continues through Nov. 13 at Riverside Theatre. Playwright Martin McDonagh’s tale is of a young man with a physical disability–or a cripple, as people were once more succinctly but cruelly called–who longs to escape his small town in Ireland and become a star. The play was inspired by the actual visit of a filmmaker to the island of Inishmaan in the 1930s. McDonagh imagines what such an event must have meant to the townspeople, especially to one who has particular dreams of a larger world. Funny and bitter. Check it out.

Stick Fly by Lydia R. Diamond also takes place on an island, but in this case the setting is the present day, the characters are African-American and rich and the island is Martha’s Vineyard. It’s a family drama, wherein everyone expects a peaceful weekend of sons introducing their girlfriends and everyone having a jolly time, but, instead, everyone ends up torn asunder by politics, sex and family secrets. To find out how they make it through, see Stick Fly at the EC Mabie Theatre at The University of Iowa Theatre Building Nov. 10-12 and 17-19 at 8:00 p.m. and Nov. 13 at 2:00 p.m.