When a theatrical performance is done well, it appears effortless from the perspective of the audience. The actors’ voices carry at the right volume, scenery changes swiftly and the lighting and sound effects occur at just the right moment to highlight the action. Popular culture celebrates the visionary director who creates stirring works of dramatic art, but from opening night onward there is one person who is central to making sure that this art happens without a hitch: the stage manager.

The stage manager is the member of a play’s production team who is responsible for coordinating actors, scenery, costumes, lighting, sound and props so that the play remains consistent during every performance. Though concerned with material matters, Rachel Potthoff, the stage manager for Theatre Cedar Rapids’ production of Jesus Christ Superstar, explains that it is for a higher purpose. “A stage manager is responsible for maintaining the artistic vision of the directing team,” said Potthoff. “They make sure everything stays true to the script, that the actors have the best show possible every night—and that the audience enjoys it as well.”

When asked about their roles, local stage managers turned to metaphors. Adeara Jean Maurice, who has stage managed for City Circle Acting Company and Riverside Theatre, calls stage managers “the secretaries of the theatre,” taking notes to keep track of the needs of the show. David McGraw, the head of stage management for University of Iowa’s Theatre Arts Department, said, “A stage manager is an air traffic controller, only we coordinate artists instead of aircraft.” 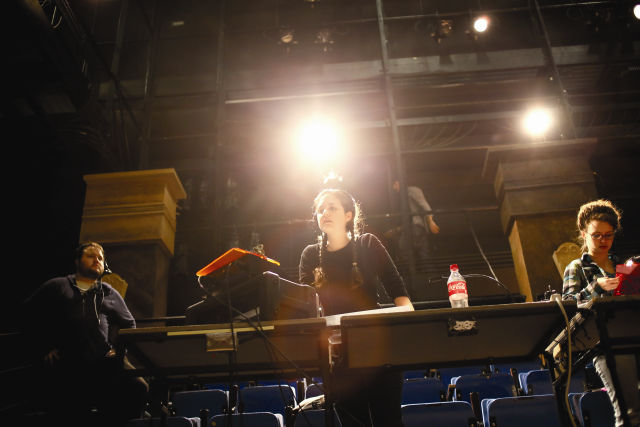 Stage managers are a relatively recent development in theatre history. Before the 18th century, actors in a company would fulfill any backstage role they could, including directing and managing production needs. As theatre technology became increasingly complex, theatre companies gradually developed jobs dedicated to offstage production needs. Originally, one person would serve as both director and stage manager. Today, a director is responsible for developing the concepts for how the play should look and feel. The stage manager then takes responsibility for the production after opening night.

A stage manager might begin working in the very early planning stages, running production meetings and auditions. “They are in control of making sure everything goes smoothly and there is clear and effective communication,” explained Maurice. “They often get emailed by designers questions for the director, communicate with the director, then relay back to the designers.” Once rehearsals begin, the stage manager takes notes about new or altered needs for costumes, props and sets. They write down blocking, which are notes describing the movements made on stage by the actors. In shows with actors that belong to Actors Equity, the union for stage actors, the stage manager makes sure that the director adheres to union requirements for break times and rehearsal lengths.

But not all stage managers are involved in the early stages of a production. When Potthoff works for Theatre Cedar Rapids, she begins working once the production moves into tech rehearsals. This is the time when rehearsals move into the final performance space and the director incorporates the technological elements of the play, such as scene changes and lighting. By this point, the stage manager has a “cue script,” which details every moment of change in the show—from numbers assigned to every scene change, to light and sound effects, to all other details that require the coordination of the backstage crew and technology operators. The script is so clear and detailed that Potthoff joked, “If I get hit by a bus, someone should be able to step in and follow the cue script without any problems.”

The stage manager coordinates the changes detailed on the cue script by informing each crewmember responsible to stand by, then announcing “Cue [number] GO!” The stage manager and crew practice each cue during rehearsal and continue their work through the run of the show. For many productions, the stage manager “calls cues” through a headset from an enclosed lighting booth in the back of the theatre. Potthoff has worked on productions requiring more unique approaches to calling cues. When she stage managed for a play in which the light and sound boards were open and close to the audience, she and the board operators communicated visually through hand signals so as not to disrupt the play with their voices.

After each performance, the stage manager often sends an email to the cast and crew with a list of notes from each crew, such as missed lines and late cues. Through these notes, a stage manager ensures that the cast and crew avoid sloppiness in their work. “We are never satisfied,” McGraw said, “On the 100th performance, I am still finding ways of improving the show and keeping it as fresh as opening night.” 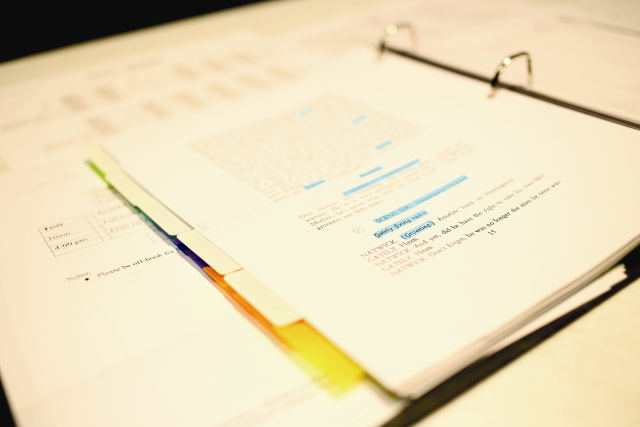 Potthoff explains that communication is important not only for calling cues, but also for being approachable to all cast and crew. “You want everyone to have a pleasant experience,” she said. “Most of my productions are on a volunteer basis. People are doing it out of a labor of love, and you want them to come back.” A stage manager also needs to be flexible to cope with the unexpected events and motivate a variety of people to work hard. As McGraw describes it, “On any given show, I might need to be the confidant, the cheerleader, the diplomat, the authority figure, the drill sergeant and even the clown.” The audience does not see the massive coordinated effort involved in making the show run smoothly, but for stage managers this is a sign that they have done everything right.