Editor’s note: Businessman Kirk Walther passed away on Sept. 24 after more than 35 years of service to the Iowa City music community. A memorial is planned for Nov. 25 at Trumpet Blossom Cafe. Community members are encouraged to bring a vinyl LP with a sticky note letting the DJs know what song to play. Memories will be shared starting at 5 p.m., and the music will start spinning at 5:30.

As any small business owner will tell you, an owner’s DNA is woven into the fabric of their business. It is an extension of them, a reflection of their ideas, ideals, goals, vision and integrity, and, conversely, the business becomes a part of the owner. I write this about Kirk Walther, owner of Record Collector, a man I consider to be the best boss I ever had, but an even better friend. I cannot tell anything about him without talking about the Record Collector, so that is where I will start.

I first walked into the Record Collector in 1993, and when I briefly lived in Iowa City that place was my go-to for buying and selling used CDs. When I moved to Ames less than a year later, I tried to find another place to buy music there, but I was always having to order it and the shopkeepers had no idea what bands or labels I was talking about. After about a year of absence from the Record Collector, I began getting into vinyl, and nobody in Ames stocked it.

Younger readers have no clue about the struggle a music head endured before the internet allowed you to listen to everything. Your local music shop was the hub of the indie music scene, and the shop owner and record store employees were the tastemakers — the gateway to new, exciting music. No store in the state of Iowa compared to Record Collector. They were more well-rounded, had a deeper knowledge of both current music and music’s history and were just plain cooler than anyone else in the game. It was and is my opinion that nobody was anywhere close to their level.

Reluctantly, I started making the two-plus hour drive twice a month the day after payday, just to go to the Record Collector. As my knowledge grew, so did my thirst. I started going to shows, but they were all in Iowa City too. What the hell was I doing with myself, working a shit job in Ames, just to make enough money to come to Iowa City to buy records and watch live music? It made no sense. It was time to move back so I could have instant access the record store I had grown to love.

I wasn’t back here a year before I was hired at the Record Collector. I have always told people I bought my job — that at some point Kirk could no longer deny me the position, because I was in the store every damn day, literally. In reality, Kirk wasn’t just a savvy collector of vinyl, he was a savvy collector of collectors. He knew that if he were to hire the people who were the hungriest for knowledge — people looking for oddball records by even odder bands — and then bring them into the fold, he too could learn something. It could only make for a stronger and better rounded store.

In the late 1990s, there were a lot of music stores in town: from Sal’s to BJs, from Musicland to Sam Goody, Real Records, Vibes, etc. There was a strong punk and hardcore scene, a thriving techno/house/electronic scene, people buying hip hop, jazz, blues, funk and soul, old country records and more indie rock than you’d believe. Back then, used CDs were three-quarters of the business. Within 10 years every other store was gone, used CDs meant about as much as DVD rental and electronic music fans no longer were DJing vinyl 12-inches.

The iPod and iPhone changed everything. CD burners, Napster, iTunes and BitTorrent sites decimated the music industry, destroying labels and indie stores alike. Indie bands’ abilities to tour and make livings as musicians became next to impossible, but through it all Kirk kept Record Collector afloat. How did he do this? When every other store was going out of business, how did he manage to keep the doors open?

Kirk Walther was in the business for the right reasons. Sure, he wanted to make money — who doesn’t? — but he was fair with his pricing and sold quality new and used records. His dedication to the idea of vinyl collecting was second to none. When he bought and eventually sold records he was strict in his quality control. Of the hundreds of thousands or millions of records he sold over the years, every single one of them was cleaned, by hand, and almost all of those were done by him.

Kirk was first in every morning, coffee in hand, ready to listen to music, order new records, clean used ones and put in the time, effort and extreme dedication no matter what the day brought. Many of those days he would come back in the evening after going home to have dinner with his wife, Eleanor, and son, Marcus, to listen to promos of stuff coming out, to do paperwork and ordering and just plain put in the hours that made Record Collector what it was.

Kirk was also a quirky guy and, in my opinion, funny, too. He was a friendly and kind man who over the years touched hundreds of lives through his work. If you wanted to talk about records, music or shows, Kirk was right there, ready to chat. He would make ridiculous statements that would make me and the other employees laugh, like, “Electric Ladyland is the best record ever recorded.” These ludicrous statements were rarely qualified with something like, “For my tastes, Jimi Hendrix made some of my favorite rock records in the ’60s.” It was his silly absolutes that always made me chuckle, roll my eyes and love that guy all the more.

It is with a heavy heart that we must report the passing of our founder, mentor and fellow music lover Kirk Walther. He is an irreplaceable pic.twitter.com/xlRA53fNjV 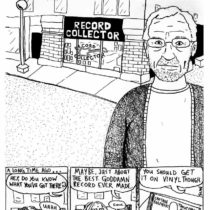 Now, let me move away from Kirk’s style and qualify that statement. Without Kirk Walther, there would no longer be any record store in Iowa City. Without Kirk there would be no Flat Black Studios. He gave me the confidence to open my recording studio and to start White Rabbit with my wife Cortnie. Through his dedication to music he has helped with local labels like Trailer (David Zollo, Bo Ramsey, Greg Brown), Scene Cred (Call Me Lightning, The Tanks, ft(the Shadow Government)), Long Play Records (Elizabeth Moen, Dana T) and more.

He helped hundreds of local-gone-national artists get started, from William Elliott Whitmore to Burmese. He did hundreds of in-stores by large touring acts (Calvin Johnson, Will Oldham). He helped bring national acts to local venues (Sonic Youth). He helped promote shows. He attended shows, hundreds of them for decades. He helped people like Andre [Perry] and Chris [Wiersema] of Mission Creek. Sean [Moeller] of Daytrotter claims Kirk as a crucial element in their start up. He gave insight to booking agents like Doug Roberson and Pete McCarthy. His employee roster over the years is like a who’s who history lesson of Iowa City music movers and shakers.

He was more involved in more aspects of music for a longer time than anybody else will be able to achieve. Much like there can never be another Beatles, Rolling Stones, Michael Jackson or Nirvana—because the infrastructure no longer exists — there can never be another Kirk Walther. Not only does the framework not exist, there is nobody else as dedicated. There is nobody with that singular of focus who is willing to make one thing, music, his entire existence. He absolutely loved music in a way few do.

In my 15 years at the Record Collector, I saw a lot of rabid music fans. Some were even obsessed, but none as obsessed as Kirk. Nobody was more of a lifer than him. He did not do it for fame, or fortune, or even for recognition. He owned Record Collector because he was the record collector. He wanted to find cool old pressings of Chess records, or Blue Notes, rare mono pressings, white label promos, short run or indie pressings. Kirk literally worked up to the Monday of the week he passed away. He did it because he loved it.

I wrote this because I loved him. Kirk was the best boss I ever had, and he was a better friend. He is a legend. His level will never be surpassed. I am so lucky to have known him, and his impact on my life and the lives of countless others is unable to be expressed, or measured. Thank you so much, Kirk.