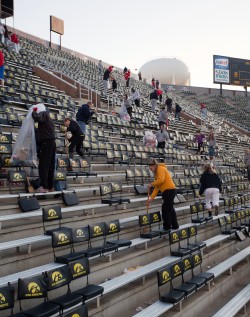 The sun has yet to rise but the full moon still hovers over the western horizon. Its pale light illuminates the trash strewn parking lot behind Kinnick Stadium. Cars dodge garbage bags and piles of disposable plates; the crunch-crunch of stray cans and plastic cups under their tires echoes across the lot. A dozen people, none wearing black and gold, stand at Gate B, yawning, their arms crossed to stay warm. When a university employee unlocks the gate and swings it open, no one cheers. Everyone shuffles down the west concourse, grabs a plastic bag, broom or shovel, and begins cleaning the mess left behind after a Hawkeye home game.

Every post-game Sunday morning, a small army of local junior high and high school athletes, their coaches, and parents, descends on Kinnick Stadium to collect recyclables and sweep the rows clean of peanut shells, popcorn, and trays smeared with nacho cheese. It is a dirty job that not only nets the Iowa City Boosters funds for school district athletic programs, but is also a vital part of the Iowa athletic department’s goal of making the stadium greener, diverting as much as 57 percent of materials from the landfill.

For years I have heard about stadium clean-up from others but never experienced it myself. So last month I decided to tag along with my sister, a volleyball coach at City High, to clean Kinnick after Iowa’s games against Central Michigan and Minnesota. And though I expected it to be hell, it turn out to be painless and kind of fun — in spite of having to wake up early after a day of enjoying cold beverages and college football.

Sunday morning clean-up starts at 7 a.m. However, not everyone arrives that early. Volunteers trickle in and join the effort for about a half hour. Though parents are expected to participate, some opt instead to drop students off and wait in the littered parking lot. When I arrived for my first clean-up, I noticed a number of adults reading the paper in the warmth of their cars. Eventually, there are enough people to make quick work of the mess left behind by more than 70,000 football fans.

Armed with clear plastic bags and latex gloves, we joined South East and City High athletes, coaches and parents in the north end zone. Little Hawks are also responsible for cleaning the west stand underneath press box, while athletes from Northwest, North Central and West High clean the south and east stands. We walked the rows, picking up plastic bottles, popcorn buckets, paper and drink cups for recycling. Students swept peanut shells, popcorn, wrappers and food-covered trays toward the aisles with brooms, some worn so badly that they looked like shuffleboard sticks. Buzzing in every corner of the stadium were gas powered leaf blowers, used by coaches and parents to blow trash into piles or push leftover crumbs toward the aisles.

Damian Simcox, the UI’s director of athletic facilities, said school district organizations and booster clubs have helped clean game day mess for more than two decades. In return for their effort, the groups receive a per game payment of around $4,200. The money earned for stadium clean-up is then used for athletic funding across the school district. Outside the stadium, the university’s parking department uses a similar arrangement with the district’s marching bands to clean the parking lots, Simcox said.

Jan Grenko Lehman, a volleyball and girl’s basketball coach at City High, said clean-up is well-worth it for the schools. Grenko Lehman, who has missed only a handful of Sunday clean-ups since 1990, said she prefers cleaning Kinnick over other fundraising efforts, like bake sales. It is, she said, a win-win for both the school district and university. 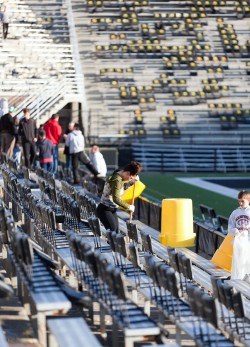 Grenko Lehman shared with me the kind of clean-up horror stories I heard from others. After a Minnesota-Iowa game played in a blizzard, Grenko Lehman said Sunday morning crews needed to chisel beer cans from the snow. The worst clean-up, she said, was the day after a potato chip promotion. A bag of Lays was placed on every seat before the game, and by Sunday morning the bags, blown by the wind, were knee deep in the corners and front rows.

My clean-up experiences, thankfully, were rather tame and ordinary. I expected the stadium to be a trash disaster zone, and it was to a certain degree. But with so many people up to the task, all it took was a little time and effort to make the stands look respectable. It was, though, not without mess. Everything swept to the aisles is then pushed down the stairs into large piles of mixed debris. Shells, popcorn, chips, nacho trays, pizza crusts, and the unfortunate plastic bottles not picked out quickly enough come together and are shoveled into opaque plastic bags destined for the landfill.

Through four home games, both game day and Sunday morning removal efforts have collected a total of 48,810 pounds of waste—48.6 percent of which were recyclables or organics diverted from the landfill. Over 57 percent was diverted from the home game against UNI, the most so far this year. And though officials at the UI’s Office of Sustainability gloat about it, they say 57 percent is just the beginning. George McCrory, a communication specialist with the sustainability office, said 70 to 80 percent of waste is diverted at Ohio Stadium, the home of the Ohio State Buckeyes.

I was eager to see what kind of alcohol was smuggled into the stadium despite security’s best efforts, and was not disappointed. Peppered throughout the north stand were small liquor bottles and empty beers cans. Judging by the number of miniature Captain Morgan bottles, many Hawkeyes like to watch their team with a rum and Coke in hand. After the Minnesota game, I ventured into the student section for evidence of drunken debauchery. Much to my surprise, though, I found it much cleaner than the north stands: less popcorn and peanuts, and the only tailgating contraband I found were a bottle of cinnamon flavored whiskey and a couple cans of light beer, including one that was unopened.

Coaches barked orders and observations across the sections. “I SEE A LOT OF STANDING AROUND. GET TO WORK!” After sweeping trash to the bottom of an aisle, a group of football players asked their coach to send a freshman to hold a bag for shoveling. The answer, yelled across 20 rows, was not what they wanted to hear: “I THINK YOU NEED TO QUIT WHINING AND DO IT YOURSELVES!” At times, clean-up gave me flashbacks to high school gym class.

When the stands are cleared, bags of trash and recycling are lined along the concourses to be placed in one of two Waste Management trucks. The worn brooms and leaf blowers are collected and put away. A concession stand is open and donuts, juice, or hot chocolate are offered to the volunteers. By then the sun is up and the metal bleachers gleam in the fresh, early light. The parents who stayed in their cars to read the news and sports pages are parked along the curb, waiting as if they were parked in front of a school. Everyone leaves quickly and presumably goes back to bed. At least that’s what I did.