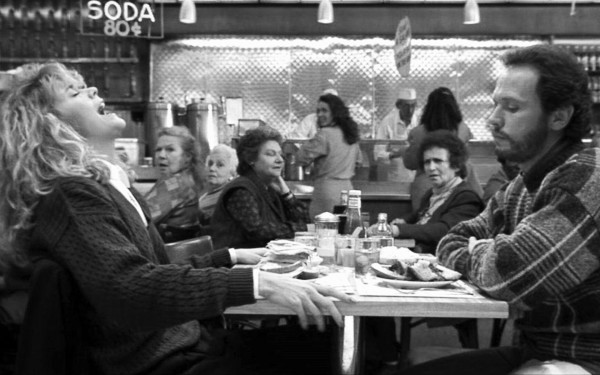 Maybe your Valentine’s Day attempts to court that hottie with a pulse weren’t such a success. So what? Hop back on that horse. The horse of studious preparation, that is. If I’ve learned anything from movies it’s that everybody wants the same brand of magical happily-ever-after love: domestic, heterosexual, monogamous, procreating, eternal love. Yes, everybody … even you! Especially you. As someone who has seen every movie ever and has witnessed all of the romantic relationships therewithin, it is my duty to impart unto you my mighty geisha-like knowledge of that sloppy, gushy, squishy thing we call love. Here’s a handy dandy guide to doing it “Hollywood style” and getting your happy ending. 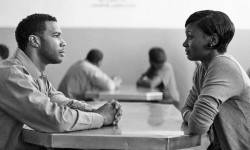 Sometimes you meet your Mr. Right, get happily married and then he goes to jail. Is he dead? No. Are you divorced? No. Then where is he? He’s in jail. This movie is about a lady going through that exact situation. In other words: a female perspective on a problem disproportionately affecting this country’s black and Latino populations.

True or False: film is a form of art. If you answered “True,” you may enjoy this piece of filmic art which offers a lush patchwork of impressions of New Orleans as formed through the disparate experiential observations of three young boys. If you answered “False,” you probably will want to go watch something with a plot.

Have you seen the movie Nine? About a bunch of broads that influenced this director dude, and Fergie aptly plays a nasty prostitute? 8 ½ is a lot like that movie except that it’s a cinematic treasure from a cornerstone of the pantheon of Italian Neorealism instead of a stinking pile of fetid garbage.

You can’t just pitch your woo at any ol’ ragamuffin on the street. You have to select your quarry with serial-killer meticulousness and according to a stringent set of predetermined qualifications. Luckily for you, I’ve sorted all the people in the world into two simple categories, “Those Deserving of Romance” and “Those Undeserving of Romance,” so that you don’t have to do any of the work to find that special someone to whom you can attach yourself like a barnacle for the rest of your life. You’re welcome.

Those Deserving of Romance:

Prostitutes with Hearts of Gold, Nutty Professors, Handsome Single Dads with Sports Jobs, Undercover FBI Agents Infiltrating Beauty Pageants, Guys Who Used to Be Womanizers But Learn Their Lessons When They Meet the Right Girl, Frazzled Young Professional Women with Moxie, Costumed Vigilantes, Sensitive Beta Males, Attractive Doctors, Women Who Are Perfect Except for One Endearing Token Quirk Such as Clumsiness or The Ability to Eat a Lot of Food, The Handsome Guy Who Objects While You’re at the Altar, Teens.

Those Undeserving of Romance:

There’s always the Say Anything speakers-over-the-head move, and of course, there’s ruining her wedding at the last second, but if you really want surefire results, save the world. Works every single time, I swear to God.

If saving the world doesn’t work, turn to the mad sciences: robotics, potions, re-animation of sewn together corpse parts, etc.

If in the beginning your relationship flies by in a montage of happy milestones, watch out: You are about to be shipped off to war, move into a spooky house where you find out later there had been some gruesome slayings or that your wife or daughter has just been taken hostage and you are about to have to fight off some terrorist mastermind’s thugs. At least you can visit your happy times together periodically through flashbacks.

If the relationship begins with you going to a secluded cabin to enjoy underage drinking and the bodies of other sexy teens, you are about to be gruesomely slain. Sorry ‘bout it.

If your relationship begins with you hating the other person’s guts because you are both sexy assassins who have been contracted to kill each other, or he or she is your bounty hunter trying to capture and incarcerate you, or because you found out after your makeover that you were the subject of some sort of cruel bet, you are in luck! This is a recipe for a lasting relationship that will end in a happy marriage. Congratulations!

Remember: it’s not that you did that horrible thing you did. It’s that you lied about it. But don’t worry because this isn’t the end; it’s just the act break leading into Act III. You’ll be back together in about a half hour.

Are you in a strained marriage? Want to know how it will turn out? If you are a good and attractive person doing everything you can to make things “work,” but you’re taken for granted by a lazy or career-oriented jerk, your marriage is going to fail. You will meet someone soon who will show you what a bastard your current spouse is and you will come to realize this new person is the right one for you. However, if you are the jerk, your marriage is going to be fine. You are about to embark on a zany series of events, like a time-travel adventure or something, that will make you realize the error of your ways and magically turn you into a good spouse. Okay, husband.

Freaking out about parenthood? You’re in for some comedic mishaps while you try to figure out the ins and outs of pregnancy. Then will come a time when you’re either screaming obscenities at your husband for cursing you with the pain of childbirth, or your hand will be painfully crushed in the vice-grip of your screaming wife as she curses you for cursing her. In the end, you will pull it together at the exact moment the baby is handed to you and then everything will be fine forever. FOREVER.

You live happily ever after until you die. Spoiler Alert! You die at the end.
Now go get ‘em, tiger!

Hi folks! It’s me; Filmy the Anthropomorphic Video Cassette! I’m here to play backup singer to all of Kit’s outrageous claims and gross generalities! Follow me, section by section, for some much needed support.

Here Kit makes fairly ageist claims about who deserves romantic love and who doesn’t; Teens do, and the Elderly don’t. Ever wondered why the old lady in Titanic is single and the young version of her has men fighting over her? Is it because Leo drowns and freezes and dies like a wuss? No! It’s because no one wants to see the old lady hold conjugal congress in the back of a car on a boat. She coulda, too! I mean, there were tons of guys there. But she knew that she was an old lady and therefore undeserving of love.

In Dr. Strangelove, no guy gets no girl. That’s because they all failed to save the world. Will Smith and Jeff Goldblum are swimmin’ in women at the end of Independence Day. ‘Nuff said.

That’s all, folks! And don’t forget: when you throw out old videotapes like me, you’re betraying inanimate friends who love you. Death to DVDs!

Kit Bryant lives in Iowa City with her valid alibi and several innocuous non-lethal pastimes. Outside the workplace, she enjoys sarcasm, light spanking, and fleetingmoments of hope and levity. Her blog is popslashcorn.wordpress.com