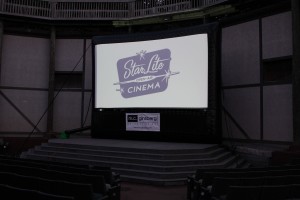 Once upon a time our downtown was lit by the Astro, the Englert, and the Campus Theaters. One by one they faded. Only the Bijou, our solitary star, still flickers. A leviathan named Marcus took over. But after a long period in which darkness reigned, we’re on the verge of a new era for the Iowa City movie scene. The brightest addition to downtown in a long time is on the horizon: an independent movie theater.

Last year I wrote in this column about how Andrew Sherburne and Andy Brodie, the co-founders of FilmScene, were working towards the establishment of a non-profit movie theater, where moviegoers could have drinks, watch good films and talk about them in a convivial environment. I’m happy to report that they’re currently in negotiations for a spot downtown to build a two-screen theater with a swanky café.

The final goal is still a couple years away from being fully realized. In the meantime, FilmScene is going to have an interim location in the building where Vito’s once was (118 E. College). The rear of the building rises up a couple stories: ideal for a one-screen theater with about 85 seats. The plan is to have a lobby space with an attached café where patrons can hang out and have beer, wine, coffee or snacks. Essentially, the interim spot will be a microcosm of what’s to come. In coordination with the Bijou—to prevent overlap—FilmScene’s “micro-cinema” will be showcasing international and American independent movies hopefully by January or February of the coming year.

There are still a few bumps, mostly with the food. FilmScene is working with Marc Moen, who received some city money to redevelop the Vito’s location with the proviso that he not burden downtown with another drinking establishment or restaurant. Since the too-much-crazy-drinking problem will be helped rather than hurt by a civilized café with movies, an exception has been made for beer and wine. There can’t be a kitchen on site, but the plan is to have food catered in.

While we’re waiting for our “micro-cinema,” FilmScene has a dynamic schedule of autumn events. On various Fridays in September and October, the Riverside Festival Stage in City Park (where the Shakespeare plays are performed) will turn into an outdoor “Starlite Open-Air Cinema.” On Friday, Sept. 14, you can congregate at the park around 6 o’clock, get some pizza, listen to Kevin Burt play some blues, have a drink and, at dusk, watch The Blues Brothers, a movie you can never see too many times. On Sept. 21, you get to be part of the smashing of an office printer before a screening of Office Space. In October, the Starlite Open-Air Cinema will feature Close Encounters of the Third Kind and Psycho. Tickets are $5, and the popcorn is free.

Also in October, FilmScene is bringing back to the Englert Alloy Orchestra, the great three-man ensemble, to perform their original score to F.W. Murnau’s Nosferatu: A Symphony of Horror (1922), the vampire movie that begat all vampire movies. As anyone who attended Alloy’s performance for Metropolis last year will tell you, this is an experience not to be missed.

Sometimes I worry that all the good things of life—books, records, cafés, movies—are being replaced by their creepy robot doubles. If we’re going to maintain a real city with real things in it, we need to commit to vibrant public spaces, where surprising things can happen. The biggest hurdle for FilmScene, as is usually the case, is money. So, be on the lookout for their fundraising campaign in the coming months. And go to the movies!

Scott Samuelson teaches philosophy at Kirkwood Community College and blogs about music with his son at billyanddad
wordpress.com.