You’re likely to feel some righteous indignation immediately after watching Andrew Haigh’s Weekend—the new British, mumblecore, gay-romance movie—at the Bijou from Dec. 2-8. No, I don’t mean that you’ll be bothered by the gay sex. Regardless of your sexual politics or persuasions, you’ll be struck by the movie’s candor and humanity. Nor do I mean that you’ll balk at the twenty-something British mumbling and vérité style. I’m pretty sure that the aesthetics and meanings of the movie will eventually sweep you to all the places you want a romantic movie to go. Your problem will be that because Weekend will have glowingly evoked the unmistakable, unfakeable spirit of falling in love, you’ll fill with disdain for all the cheap substitutes we’ve had to accept over the past decade or so.

Weekend, Andrew Haigh’s second feature, begins unassumingly, like most momentous things. The gentle, abashed protagonist Russell (played pitch-perfectly by Tom Cullen) smokes pot, mills around a party, drifts off to a bar and then tries to hook up. In fact, I suspect that those under the age of thirty will be unable to distinguish the movie’s first fifteen minutes from reality itself. 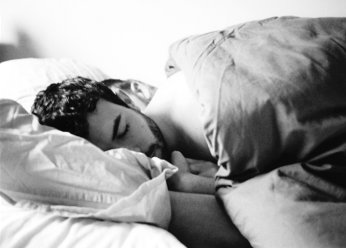 Suddenly Russell is waking up next to the handsome, feisty Glen (played just as brilliantly by Chris New), who after a cup of coffee pulls out a tape-recorder and asks Russell to talk about last night for an art project he’s working on. The casually-hooked-up pair proceed to chat, argue and exchange affections. Glen awkwardly mentions that he’s moving to America in a couple days. Before you know it, they have fallen for each other and are forced over an intense weekend of conversation, drugs and sex to deal with the barriers, internal and external, to their coupling.

Love—at least the kind that thrills and tyrannizes us—is a shuddering dialectic of similarities and differences. Russell is reticent, pot-smoking, romantic, pro-marriage and partially closeted. Glen is aggressive, cocaine-sniffing, cynical, anti-marriage and completely out (at sixteen he told his parents: “Nature or nurture, either ways it’s your fault; so get over it”). Though the couple tend to conflict over questions of society and identity, there’s nothing schematic in their conversations; in fact, the movie touchingly shows how they share in each other’s differences and sometimes even switch roles.

Moreover, straight or gay, we’re living through a radical revision of what’s public and what’s private. Ubiquitous cell-phones and computers bring the whole world to us and us to the whole world. Those who have come of age in such a strangely-omnipresent, endlessly-opening, always-mediated world have serious trouble binding together what they’ve barely known to be separate.

Shallow romantic comedies like Friends with Benefits and No Strings Attached at least show forth one deep dimension of the problem: the difficulty of connecting our sexual drive with the rest of our identity. Weekend deals with this problem more heroically. The two lovers give it their all in wrestling—verbally, psychologically and sexually—with who they are and what they want to become.

While the movie explores plenty of big themes, Weekend couldn’t feel further from the anxieties of politics, even those surrounding gay issues. It’s first and foremost a love story that wields the uncanny ability of cinema to enter into the most intimate, fleshy moments and connect them up with the rest of life. As I watched the two main characters occupy Russell’s scrubby bed, a loud bar, an eerily-lit bus, I found myself suffused with memories of scrubby beds, loud bars, eerily-lit buses—exactly where the tragicomedies of love are enacted.

I’m not going to give away the ending. But let me say that if you’re a weeper, you’re likely to cry twice, once at love’s quiet triumph and once at its quiet tragedy. You know early on that you’ll have to endure both. The only question is which will come last.