Kids, you may not know this, but vampires used to be scary. Nowadays vampires have perfectly gelled heads of luxurious hair, and their supernatural powers include sparkling and being bad-boy-cute. It wasn’t always so. The scariest vampire of all had no hair to gel, and instead of taking girls on frighteningly romantic dates, he feasted on human blood. He was called Nosferatu, and he was terrifying. Not terrifying as in, “he’s such a good boyfriend he knows me better than I know myself,” but in that “he ate a town” kind of way.

F.W. Murnau’s Nosferatu (1922)—playing Thursday, Oct. 11 at the Englert—is based on a best-selling book, Bram Stoker’s Dracula, and stars a plucky young “sinless maiden.” (Some things never change.) What an outlandish time the 20s were! E.B. White, in his introduction to “The Lives and Times of Archy and Mehitabel,” put it this way: “Spiritualism had captured people’s fancy also. Sir Arthur Conan Doyle was in close touch with the hereafter, and received frequent communications from the other side. Ectoplasm swirled around all our heads in those days…Souls, at this period, were being transmigrated in Pythagorean fashion.” People thought, “What if death isn’t as permanent as our 1920s-era equivalent of Fox News would like us to think, huh? Maybe bad stuff can cross back over and suck out our lifeblood?”

As is the duty of any well-conceived horror film, Nosferatu suggests a scientific basis for the implausible predator from beyond the grave when a biology professor examines such strange natural examples as a carnivorous plant and an “invisible, almost bodiless” polyp. Based on the freaky animals David Attenborough’s shown me over the years, I’m pretty sure that Nature and God constantly conspire to create the most bizarre beings they can think of. Ever heard of a tardigrade? Look it up, unless you don’t want your mind to be blown. A blood-sucking humanoid is no stretch for those guys. And people in the 1920s knew it. 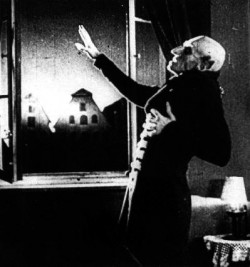 In those backwards days, people didn’t have cellphones that allowed them to watch Nosferatu via instant-streaming Netflix on the bus. They had to watch it in a dark, immobile theater, like savages. Dr. Rick Altman, the preeminent scholar of film sound and my former professor, would go into conniptions if I told you Nosferatuwas a silent movie. Don’t get me wrong, it wasn’t a “talkie,” but it wasn’t silent either. In 1922, people may not have had the 3D and CGI and other acronyms we enjoy today, but they weren’t dopes who just plopped down in front of a screen with nothing to listen to but the throat-clearings, whisperings, lip-smackings and chair-creakings of their fellow audience members. People would have gone insane and sworn vengeance on one another. That scenario would have precluded future generations from ever existing. No, silly. They had sound. In the theater they listened to a score performed by a magnificent live orchestra . . . or at least by a dude on a piano. Luckily for those of us saps in 2012 constantly cheated by our soulless Dolby surround sound, the world-class Alloy Orchestra is playing in Iowa City at the Englert’s showing of Nosferatu.

Maybe Nosferatu isn’t as sexy as the vampires we’re used to, like Edward Cullen and Bill Compton and Count Chocula. Maybe Nosferatu’s OKCupid profile would list his hobbies as “carting coffins full of the goddamned soil I was buried in” and “causing insanity.” But this is your chance to see what it was like when soundtracks were played by live musicians instead of by AC/DC. It’s your chance to go back to a time when spirits could enter your body and make you sick or crazy (and I don’t just mean the alcohol kind). It’s your chance to remember why closet monsters were so scary when you were a dumb little kid, because the boogey man seemed so real. His name was Nosferatu, and he was terrifying.

Kit Bryant lives in Iowa City with her valid alibi and several innocuous non-lethal pastimes. Outside the workplace, she enjoys sarcasm, light spanking, and fleeting moments of hope and levity. Her blog is http://popslashcorn.wordpress.com/