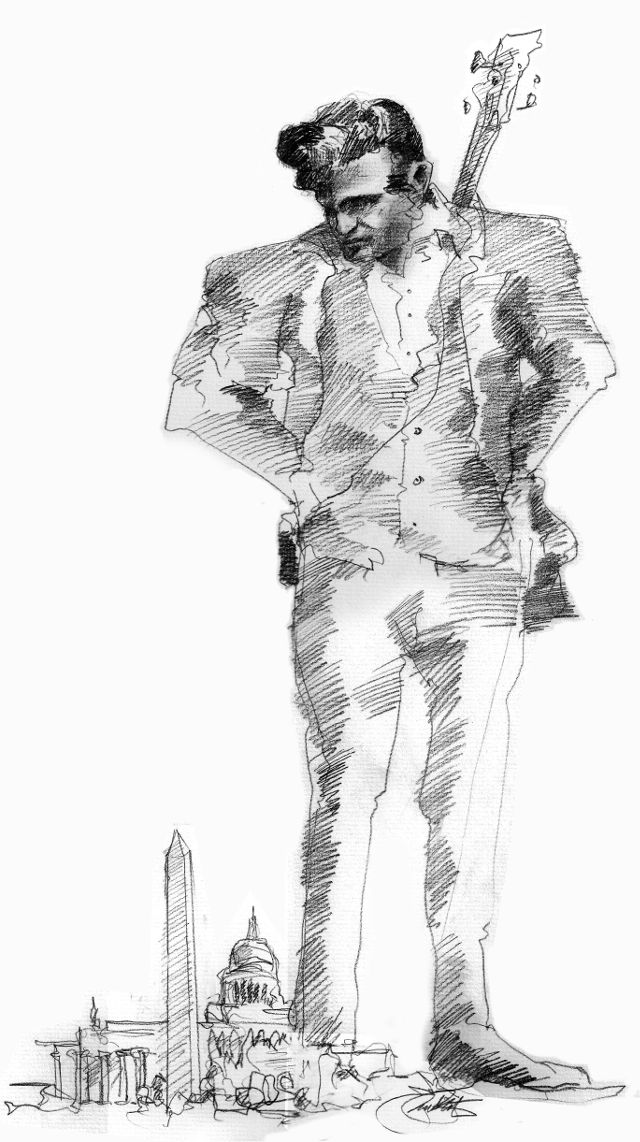 Once again our country is proving that the Civil War isn’t over. The representatives of our red states and blue states, which correspond neatly with the North and the South, are locked in a ghostly combat ostensibly over health care and budgetary issues, but really over visions of self and society. Don’t worry: I have the solution to all our problems. Listen to Johnny Cash. Seriously.

Oh, also go to Filmscene’s Scene 1 theater, because on Nov. 8 they’re putting on a special Cash extravaganza. The newly-opened theater is showing James Mangold’s Walk the Line (2005), the biopic starring Reese Witherspoon, who gives a bright performance of June Carter, and Joaquin Phoenix, who manages insight into Johnny Cash, whose identity was forged, not unlike Phoenix’s, under the shadow a much-loved brother’s death.

John Carter Cash, the famous couple’s son, will be at the screening. The current keeper of the Cash family flame, John Carter Cash is the writer of various books (including a memoir of his father), a music producer (of Elvis Costello, Mavis Staples, Ralph Stanley and his father in some of those final brilliant recordings) and a performer in his own right. He’ll be on hand for discussion, book signing and an intimate music set by Cash afterward at the Clinton Street Social Club, where, I understand, some Cash family recipes will be served.

So how will “Walk the Line” and Walk the Line mend our country’s current divisions? We feel these divisions in our clashing aesthetic sensibilities: The New Yorker vs. NASCAR, lattes vs. Busch Light, rock vs. country music. Under these matters of taste lurk differences of urban and rural interests, reason and faith, individual rights and family values, modernity and tradition. Under these differences are even darker causes pertaining to old traumas and dreams. It’s these darker causes that the Man in Black, with that voice, was able to reveal and make more understandable.

When Johnny Cash and Bob Dylan collaborated on Nashville Skyline in 1969, it shocked the country. Didn’t the Jew from Minnesota belong to the sensibility of the blue states and the Christian from Arkansas to that of the red states? Neither of the musicians saw things that way. Cash admired not just Dylan’s songwriting but his sense of brokenness and justice. And when Johnny Cash died, Bob Dylan wrote, “Truly he is what the land and country is all about, the heart and soul of it personified and what it means to be here; and he said it all in plain English. I think we can have recollections of him, but we can’t define him any more than we can define a fountain of truth, light and beauty.”

It’s not that Johnny Cash’s music holds some key to crafting better laws, but it shows that when you push deep enough into Bible-inflected lyrics and the tones and rhythms of country music, you find something that both underlies and transcends our worries: the dynamics of sin and grace, suffering and redemption, injustice and justice, which aren’t unique to any geography or political party.

Walk the Line—of which John Carter Cash was an executive producer—is framed by his father’s performance at Folsom State Prison. Why do those prison concerts so capture our hearts and imaginations? In the thrills and dark beauties of the music is what I’d call a blues-understanding, an ability to approach our humanity without scorn or hatred and lift it up.

The movie roots this blues-understanding in Cash’s struggle with his own demons. Though he was never sentenced to prison, he was frequently told by fans that their fathers or uncles had served time with him, probably because of the believability of songs like “Folsom Prison Blues.” Maybe there’s some truth in the urban legend: Cash seems to have been judged in his own spiritual courtroom, served hard time behind the bars of his psyche and come out a free man through his music.

We’re always in need of blues-understanding, especially now, when watchers of FOX and watchers of MSNBC look at each other with such scorn and bafflement. Here’s Dylan again: “If we want to know what it means to be mortal, we need look no further than the Man in Black. Blessed with a profound imagination, he used the gift to express all the various lost causes of the human soul. This is a miraculous and humbling thing.”

I wonder how much of our sense of Johnny Cash is fact and how much is legend generated by the seductiveness of his singing voice and hagiography like Dylan’s tribute and Walk the Line. Let’s ask his son.