By Eleanore Taft and Zak Neumann 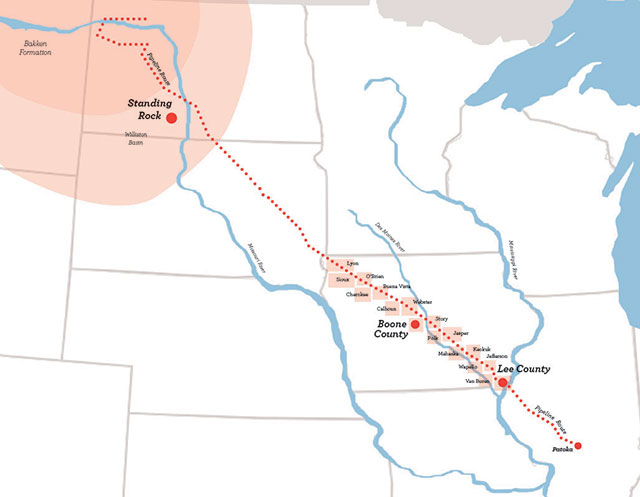 With protests and actions in North Dakota and in the Iowa counties of Boone and Lee, advocates of First Nations, environmental activists and libertarian opponents of eminent domain have made their voices heard, and have united under a common banner in opposition of the Dakota Access Pipeline project.

“This standing rock movement emerged when two issues came together. I’ve always imagined it as two weather fronts colliding and causing a flood that has stirred up many of the issues that we face today. The first front is the water and the other is Native sovereignty. These two fronts collided when LaDonna and her small group set up camp April 1 at Standing Rock. As the movement has grown, it has stirred up a lot of unresolved issues and future concerns. This list is extensive: the water, the land, white privilege, settler anxiety, native sovereignty, colonization, police brutality, racism, corporate ethics, global conglomerates, etc. But there is only one endgame for this movement that I, personally, see: To take on climate change. There is nothing more pressing than this issue right now. We are being led towards a mass extinction event by our greed and amazing ability to evade the obvious and scary truth.” — Christine Nobiss, Plains Cree and Salteaux, founder of the group Iowa to the Camp of Sacred Stones.

“Bill Cole from Keokuk Waterworks wrote to the Iowa Utility Board that in the event of a pipeline break, Keokuk and surrounding rural communities would be on bottled water within 8 hours.” — Jess Reznicek, member of the Des Moines Catholic Workers.

The Dakota Access Pipeline (DAPL), also known as the Bakken Pipeline, was proposed by Dakota Access, LLC (a subsidiary of Energy Transfer Partners of Dallas, TX), and is projected to transport 470,000–570,000 barrels of light sweet crude oil per day.

Information collected from the websites of Energy Transfer Partners, L.P. and the Iowa Utilities Board. This article was originally published in Little Village issue 206.