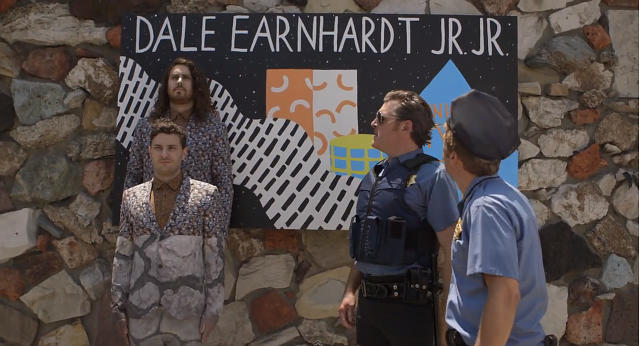 Detroit electro-pop duo Dale Earnhardt Jr. Jr., comprised of Josh Epstein and Daniel Zott, is set to perform tonight at Gabe’s and if you’re still deciding your plans for the evening, here are six reasons you may want to consider catching this show.

1. Dale Earnhardt Jr. is an actual fan of the band’s music

According to this excerpt pulled from a June 2011 issue of ESPN The Magazine, Epstein states that after the duo picked their name following hours of listening to sports-talk radio they felt the need to email racecar driver Dale Earnhardt Jr. himself to clarify that they in no way intended to mock his name with their music. Included in the email were some samples of their music, which Earnhardt Jr. responded to quite positively. According to Epstein, he was very down to earth about the whole thing stating that he liked the music and told them to “be careful.”

2. They proudly rep Detroit, the Midwest

Since releasing their dreamy and dance-happy debut, It’s a Corporate World, in 2011, DEJJ have worn their Midwestern roots on their sleeves, most notably on the track “We Almost Lost Detroit,” a triumphant and soaring rework of the Gil Scott-Heron classic. Now two years later, the duo have yet to uproot from their hometown for either coast, and show no signs of leaving it behind anytime soon.

3. Their sophomore album, The Speed of Things, is due out October 8

Inspired by our Internet-obsessed culture, DEJJ is set to release their second LP The Speed of Things, on October 8 via Warner Bros. records. The band has made available four tracks from the upcoming album, and they are all amazing, including the jazzy “War Zone” below.

4. The lead single from their new album, “If You Didn’t See Me…You Weren’t On the Dancefloor” is an awesome song, has an even more awesome video

Released earlier this year and subsequently dancing around in my head ever since, “If You Didn’t See Me…You Weren’t On the Dancefloor” is four and a half minutes of pure pop bliss topped off by one of the catchiest melodies you will hear this year. The video, co-produced by Funny or Die, stars actors John Ennis and Jay Johnston as cops searching for the duo. Spoiler alert, they eventually find them on… you guessed it, the dancefloor.

Not only do DEJJ write and perform fabulously catchy pop tunes, they are also conscious of those who wish to keep grooving even after the show has ended. And even though there is probably an app for that, why not turn to DEJJ for a feverish mix that is impossible to listen to while standing still?

6. They are an incredible live band

So as you can see, it is certainly in your best interest to get on over to Gabe’s tonight for what promises to be a fun time. And if for some reason you wake up on Saturday morning and realize that you didn’t see me the night before….then you clearly must not have been on the dance floor.