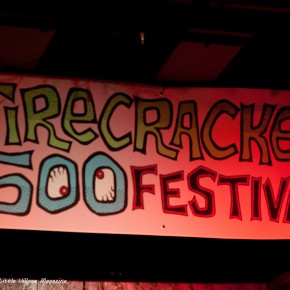 Even though firecrackers are technically illegal in Iowa, the Firecracker 500 Festival had no problem festively blowing up Gabe’s, uh, with music, that is.  Twenty-three bands stomped and sweated across the stage over three days, and the audience stomped and sweated right along with them. It’s clear that the music scene in this town is hardcore when people are eagerly packing themselves up against a stage in record-setting heat. I can’t claim to be the most hardcore of the hardcore – even I had to step out to cool off and recharge. But I stuck it out as long as I could and got lots of photos in the process (shocking, I know).

If you were in attendance, you know that there was plenty of talent, both local and touring, tearing up the cochleae of everyone in attendance. And I mean that in the most enjoyable, endearing way. I got to enjoy some of my long-term favorites, like Brooks Strause, Slut River and The Bent Scepters, who always put on a good show, and I fell in love with some bands that I had never heard of, like The Vignettes, The Hussy and Outer Minds.

Now, a three day rock show isn’t going to be without a few spectacles, and Firecracker delivered in this respect. From the Vignettes wolf-howling in a pitch black room, to the Hussy’s front man lighting his guitar on fire, it was hard to not be completely interested in what was about to happen. Richard Beymer (of Twin Peaks fame) even showed up to film Slut River. You never know what crazy shit is going to happen at Gabe’s. Check out the spectacles for yourself….a slideshow for each day. I wasn’t able to be around for every band, but a girl’s gotta sleep sometime, ya know.