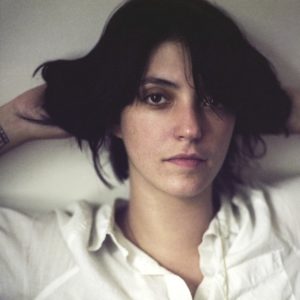 I’m fairly new to this music journalism thing, but I have enough sense to know when an interview is entering a downward spiral. When Sharon Van Etten had to ask, “are you okay?” mid-interview, I knew I was in trouble. Minutes before my phone date with Miss Van Etten, my roommate knocked on my door, “dude, our basement is filling up with shit water. What do we do?” He wasn’t lying; we had ourselves a real plumbing situation. I was already a little bit nervous about interviewing one of indie music’s biggest rising names, and now I had to do that while trying to block out the image of sewage spewing up from my shower drain.

It wasn’t a complete disaster. Despite the plumbers trudging in and out of the house and a bad phone connection, we managed to get a lot accomplished. Sharon Van Etten’s new album, Tramp was released last month and it is her most cohesive album to date and has been praised by the New York Times and just about every music magazine/website imaginable. The record was produced by The National’s Aaron Dessner and features members of Beirut, The Walkmen, Wye Oak and Julianna Barwick. While her sound is filled out with the help of collaborators, it is her vocal melodies and heavy lyricism that remains central in her songwriting. Sharon visits Iowa City this week for the Mission Creek Festival, and these are the highlights of our conversation.

I noticed that there are a lot of awesome guest appearances on the new record. How did you get hooked up with people like Zach Condon of Beirut, Julianna Barwick, etc.?

Aaron [Dessner] worked on the record with me, and he and I just talked about who our favorite musicians and singers were and determined what the record needed. I wanted to make more of an effort to work people, especially with vocal stuff. I didn’t want to be the only voice on this record. I harmonize with myself all the time but it’s a lot more fun to do it with other people. One of the challenges for me on this record was me letting go, opening myself up and collaborating well with other people. In the company of your friends it’s a little less scary. Aaron and I just picked our favorite people. Basically, we just came up with a list of people that we wanted to play with anyway and then we picked songs that made the most sense for them to sing or play on. Between the two of us, playing guitar and bass, there are a lot of things we can’t play, and it was nice to get great musicians to fill those roles.

Who would you most like to work with in the future?

I would love to work with PJ Harvey.

What was it like working with Aaron? What did he bring to the table?

I walked into the studio with songs that were already finished but I didn’t know instrumentation-wise where I should take them, so we would just start randomly doing guitar and vocals and then he would push me to describe what I wanted the vibe of the song to be. But I’m not a very musical/technical kind of a person so he had to really coach me. I had to teach myself how to explain myself better, like mouthing beats, or showing him with my hands what kind of a drum beat I wanted because I don’t know time signatures, I don’t know beat measures. He was really my interpreter for that sort of thing.

Your albums tend to revolve relationships and breakups. Is that safe to say?

Whether it is me, friends of mine, or using the relationship as a metaphor for my own inner demons, yeah basically. It’s very universal. My first album was coming from a really broken place, the second one was trying to get out of it and this one is more looking back and finding peace with my past and with matters of the heart or whatever. You know, like being able to move on, be at peace and acknowledge things that happened and not really dwell on that.

I’ll probably always write about these sort of things. I would like to separate myself more; to write more stories and have more distance. I want to apply it in a way where it’s more of a narrative that doesn’t have to do with me. I’m just learning how to write. I am a singer first and foremost. I don’t think my lyrics are my strength yet. It’s something I want to improve upon for sure.

It was at this point that I explained that the sound in the background was an enormous industrial machine pumping sewage from the basement. I apologized and we agreed that I would follow up with some quick follow up questions via email. Sharon was extremely kind and understanding.

At what point as a songwriter did you realize that music could be a full time thing?

When I was touring so much that I couldn’t keep my full time job. When I decided that I’d rather not have a permanent residence.

Going back to school to become a therapist.

No. I have a couple acoustics I write on at home. When I go to my practice space and I can be as loud as I want, I’ve been writing on my 1965 Fender Jaguar.

The last question assumes you write your songs on guitar. Have you written/do you plan on writing songs on different instruments?

When I was staying at my friend CJ’s house, I wrote a bunch of songs on piano, although I am a terrible piano player… I’ve also written some electronic songs on my computer and some songs on harmonium.

Many of your songs are lyrically very personal and emotional. When you’re on the road you have to play these songs for people every night. Is this challenging at all?

It is challenging because I go back to those emotional places, but it is positive because I feel a sense of relief when I can acknowledge I am far from that place now and feel healed in some way.

We seem to be at a point where ‘indie’ is truly crossing over into the ‘mainstream.’ Taking a look at the Grammy’s, last year’s big news was Arcade Fire and this year was Bon Iver. As one of the indie community’s rising names right now, is 2012 the year for an SvE Grammy nod?!

Active Child – You Are All I See

She Keeps Bees – Dig On

Have you ever had to call a plumber for any reason?

Catch Sharon Van Etten at The Mill this Thursday with Bowerbirds, The Lonelyhearts and Alexis Stevens for the Mission Creek Festival.

*Little Scream will be performing at Mission Creek as well with Daredevil Christopher Wright, Brooks Strause and North English on Sunday at The Mill.