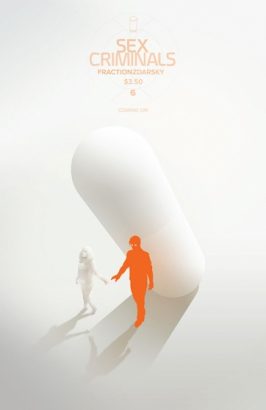 But here we are. Writer Matt Fraction, husband of Bitch Planet and Pretty Deadly writer Kelly Sue Deconnick, is wise to wrap the early issues around his relatively simple protagonists, Jon and Suzie, while unravelling the basic plot: Jon and Suzie, along with most of the characters in Sex Criminals, stop time when they orgasm. Suzie calls this stopped-time The Quiet. Jon calls it Cumworld. The Sex Police, led by a lady named Kegelface, want to regulate Cumworld (aka “The Quiet).

Sex Criminals, to the extent that it’s actually about sex, captures and disabuses this notion as well as anything. But Sex Criminals isn’t a self-help book, or an advice column, or a meditation on sex. It’s a book about exploration.

Sex is confusing. Havelock Ellis understood sex better than anyone else in his lifetime — over thirty years he wrote the definitive text on sex in two centuries, the six-volume Studies in the Psychology of Sex. He set out “to solve the problem of sex,” but at the end of his career lamented that he had only discovered what questions to ask. Ellis was a virgin until his sixties, when he discovered, by accident, that his fetish was being peed on.

Ellis’ legacy, after he died, was intercepted by Freud, who re-problematized sex, from Freud to Phillip Roth. The Roth legacy of sexuality in fiction is men wallowing in their repression, and even in the 21st century artists — namely stand-up comics — still rely on a spectrum that goes from confused repression to clarified liberation.

Fraction and Zdarsky aren’t wallowing in their confusion. There’s a lot they don’t understand about sex. There’s a lot I don’t understand about sex. There’s a lot Jon and Suzie and Robert Rainbow and Jazmine St. Cocaine and Alix and even Poltergeist Carl Sagan don’t understand about their own sexualities. Sex Criminals isn’t out to explain anything, but to provide a playground in which these characters can explore themselves. They’re celebrating sex, and by extension the human experience, by exploring it. People, to paraphrase the life’s work of Walt Whitman, are worth celebrating not in spite of our complexity and occasional ambiguity, but because of them, because the breadth of possible experience implies a newness, a freshness, a perpetual reinvigoration.

What keeps all of this from being trite is the 14-year-old’s id, which pushes towards dynamism and away from static conclusions, except, perhaps, that floppy parts are funny. There is no sitting still in Sex Criminals. Artist Chip Zdarsky (Prison Funnies, Monster Cops) has a keen ability to layer colors in evasion of stagnancy — in Cumworld, especially, he turns the hues prismatic with enough space left over to shock the eye with the crispness of a Sex Police uniform or a Tentacle Porn Demon, and visible streaks of light keep our eyes moving across the panel. Elsewhere, the panels are shaped to barely contain the images within, so that they seem to be consistently bursting. Visual gags are anywhere they could be — one panel in issue ten of two people talking in a Pornes and Noble has at least 18 barely-visible parody book titles (among the hardest to see — Brave Poo World and BJ Salinger’s The Pitcher in the Guy). That panel might not be impressive if it didn’t also capture the nuanced flirting happening in it.

All of this doesn’t even mention the letter sections, where brimpers — defined in an early issue as folks who have sex with their partner’s hair, but having come to mean the community of Sex Criminals superfans — gather to confess or commiserate about their proclivities. If there’s already something sexual about watching characters explore their sexualities in the pages of the book itself, that’s just a prelude to the intimacy of the letter section, where sex advice, theory, anecdotes and jokes converge to illustrate an ethos rooted in both nerd and sex culture: finding where you have fun is the same as finding where you belong.