It’s already getting dark on Sunday when you hop off the train, just back from a weekend in Chicago. As the sun sets over the river, you take a stroll through the riverfront prairie before hitting up a few concerts: maybe a traveling symphony, followed by an electric mass of sound at the underground White Lightning Wherehouse. Ears still ringing, you wander back to your yuppie high-rise, grabbing a late night gyro on the ground floor before heading up to your condo in the solar powered elevator.

This could be a typical night in Iowa City’s “Riverfront Crossings” neighborhood, an 8-by-12 block area south of Burlington, east of the river and west of Gilbert Street. Riverfront Crossings (or ‘RivCo’, as I’m declaring it) was named one of five national pilot projects for revitalization through the smart growth program of the Environmental Protection Agency (EPA). Last fall, the EPA brought in consultants to meet with the public and create a plan to make RivCo into the mixed-use urban haven I just described. 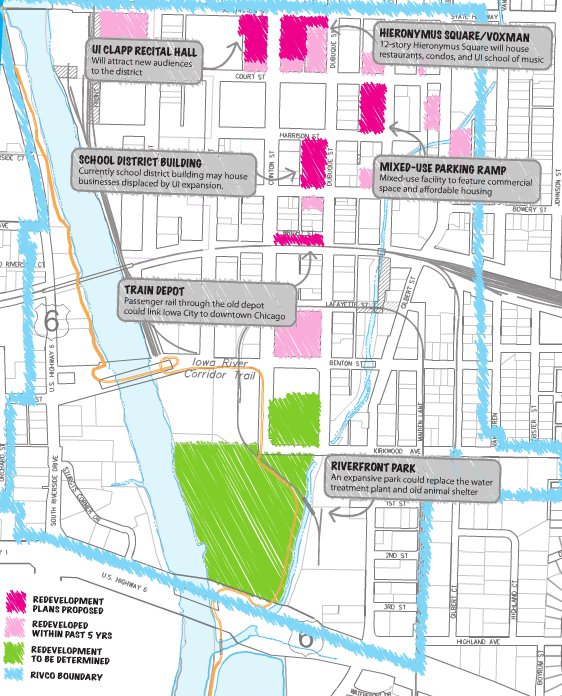 But of course, savvy reader, you’re skeptical. And rightly so. These ideas have been swirling for years, with little action. Yet now more than ever there are events underway that make change inevitable in the near future and the effect on downtown Iowa City could be huge. Forget the rumors, here’s what’s really up.

This summer the UI Board of Regents voted to relocate Voxman Music Building and Clapp Recital Hall to downtown Iowa City. For Voxman, they purchased 4.5 floors of the proposed 12-story Hieronymus square project, slated for the southeast corner of Burlington and Clinton. Across Clinton, where Bank of the West currently sits, they’ll rebuild Clapp.

Advocates praise the new foot traffic this will bring to downtown businesses while opponents are annoyed by prime downtown property coming off the tax roll. In a way, they’re both right. The question is whether increased spending from the project will somehow balance out the loss of tax revenue and downtown real estate.

But this may be overshadowed by a more basic question: Could we actually fill a new 12-story building with just the private sector?

Maybe. According to a 2007 analysis of the downtown market, we’ll have demand for over 600,000 square feet of retail, restaurant, entertainment and office space by 2017. Hieronymus square is proposing only 50,000 sq ft (plus 114 condos).

So it should be no problem, right? Except it’s hardly a coincidence that the project was languishing for two years, despite city approval, only to be suddenly revived with the University purchase.

The music school seems to be the shot in the arm the project needed to be viable. Of course, whether everybody wants another high-rise downtown is a question for a future article.

Ridin’ the Rails to Research

Two potential rail projects would pass through RivCo within a few years: one to Chicago, the other just across the river to the Oakdale research campus, both on existing rail lines. The Chicago line in particular is well past the talking stages, having already earned $1 million in federal funding, while the Cedar Rapids and Iowa City “CRANDIC” line has completed extensive feasibility studies. Both would likely come through the rail depot at the heart of RivCo, on Clinton and Wright.

Regardless of what you think about the viability of these lines, passenger rail depots can be a boon for their neighborhoods, with many studies showing positive effects on property values and business revenues. A Michigan study estimated monetary benefits from rail lines similar to the proposed IC-Chicago line and found that Kalamazoo Michigan, a college town about our size, saw a $7 million annual boost in business activity and traveler savings, among other benefits (Amtrak wages, investments in the property, etc).

However, with those millions come increased traffic and noise, issues the area already experiences with the existing freight rail. These can present problems for attracting new investors and residents, but good design can mitigate the effects through strategic traffic routes and improved rail equipment.

A recurring request in last fall’s public meetings was for housing that would attract young professionals or empty-nesters; or, more to the point, housing that would not attract students. The consultant’s report mentions anti-student-housing as a primary concern, yet gives no suggestions for a way to make it happen. This is because, wait for it…there isn’t one. The only acceptable discriminatory housing practice these days is money, and you can’t price out students without pricing out young professionals and hip retirees too.

A few ways that cities try to address these requests:

Zoning the area in a way that limits the number of unrelated persons living together, which keeps out your classic 5-bedroom student apartment. This may sound sort of big brother-ish, but it’s totally common all over the country (and in IC).

Striking agreements with developers to build housing with fancy amenities that appeal to non-students. It goes something like this: “Hey developer-lady, we’ll let you put 6 more units in your building if you make it real pretty.” The city planning department has already done this with several properties in the area.

Building their own: Iowa City is proposing a mixed-use structure at 228 E Court street that would include about 600 parking spots, 30,000 sq ft of commercial space, and 25-75 “affordable” housing units.

None of these solutions are anywhere close to surefire, as it’s unrealistic to think rental housing won’t be flooded with students, particularly the ones that don’t want to lug their brass tuba all the way across town to Voxman every day. That being said, there’s gotta be room for a few nice, affordable apartments for the rest of us. Come on developers, give an aspiring yuppie a break.

Putting the “Riv” in RivCo

The answer: Riverfront Park. No surprise, this idea got the most support in last fall’s public meetings with half the people saying they would use the park once a week (sure you will).

Here’s the only trick: it’s got to be planted with native trees, shrubs and grasses that can survive standing water and give protection in the floods. So, don’t expect a wide-open expanse for easy prancing, but do expect something a lot more attractive than vats of soiled water.

Ask and You Shall…Still Not Know

The real question in all this is whether these changes will make RivCo into a more livable neighborhood, a place where people can live, work and entertain themselves. This article has covered the major projects, but the true livability of a neighborhood depends on the details: an active street-life, an underground club reviving an old warehouse, or a corner store serving as a neighborhood hub. These things can’t be created by public initiative alone. However, if we use the public planning process to bring in strong anchors (such as a rail depot or riverfront park) and get citizen support for a common vision, everything else can begin to evolve more naturally, giving the area the organic feel of an active, mixed-use, urban neighborhood.

As we start the process of establishing neighborhood anchors, we must explore the long list of unknowns in order to move toward that common vision.

85% of last fall’s public survey participants wanted a more detailed public planning process to answer these unknowns: Will a rail line add character or just noise? Will the music school push out private business or make it more economically viable? Can we attract non-traditional residents to downtown? Does any of it matter if it all floods in 10 years?

In the grand tradition of urban planning, we can never answer any of these questions definitively. But we need to ask them and be willing to take risks to enhance our community in the face of uncertainty.