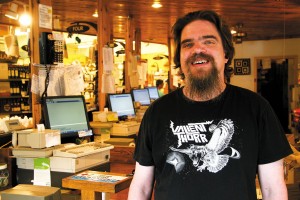 Kevin Olish died suddenly this weekend. How suddenly? I saw him working at the New Pioneer Co-Op on Saturday. He died Sunday afternoon.

You might not know his last name, but if you shopped at the Co-Op, you knew Kevin Olish. He was the chatty guy who wanted to talk with you way more than any other grocery store checkout clerk on earth. As one of New Pi’s longest-serving full timers, seeing Kevin on his customary register #1 was one of Iowa City’s dependable experiences, and for a lot of people, shopping there won’t be the same.

Kevin’s passion outside of work was music. He had an encyclopedic knowledge of Rock music going back to the 1970s, and loved Jazz as well. You would see Kevin out at local venues, sporting bright red ear protection muffs, supporting his favorite local bands. The last conversation I remember having with Kevin was about how much he was looking forward to this year’s Mission Creek Festival.

I don’t know very much about Kevin’s personal life. According to the New Pioneer Fall News Letter, Kevin was from Cedar Rapids, had lived in California for several years before moving to Iowa City in the 1990s. He has been at the Co-Op since 1996. What has endeared him to me over the years is his knack for memorizing the Co-Op member numbers of his regular customers. I’m sure he knew more PLU Codes for Co-Op products than anyone else there as well.

When someone is dependably present for so long — more than a quarter of my life, for example, and nearly the entire lives of many of his younger co-workers — you can begin to take them for granted. When they’re gone you realize the unique way they have touched and enhanced your life. I think Kevin would have enjoyed knowing how many people lives he touched.