Have you ever stuck your face in front of the spout of a hand dryer? Encircling the slipstream is where you will find abrasion, cacophony. Within the event horizon pulses warmth — at once inviting and alien, nevertheless too tender for extended periods of human consumption.

Enter the soundscape of Hexa, an industrial and bodily-minded collaboration between musicians Lawrence English and Jamie Stewart (of Xiu Xiu). Hexa was first brought together to create an audial response to David Lynch’s “Factory Photographs,” as a part of the larger Lynch retrospect Between Two Worlds held at Brisbane’s Gallery of Modern Art in 2015. Last night, April 4, 2017, was their first U.S. performance outside of California.

There’s a reason factory work has caused severe damage to eardrums — and psyches, too. But Hexa was not tinnitus-inducing. The duo foregrounded their set on a wall of sound, feedback against cogs of pneumatic pressures, eventually giving way to a thrumming pulse. In a nearly unlit upstairs at Gabe’s, Hexa performed in front of two eight-by-ten Ampeg towers; Stewart, on the left, helming auxiliary high-ends, while English, on the right, held down an unrelenting low-end.

A projector was set center stage as a third performer. Lynch’s photographs on display explored the urban experience of a factory as well as its intestines: the valves, the motherboards, the air ducts. There’s an element of fascination and fear. Looking out of a broken pane from within a nondescript factory is another derelict brick-and-mortar; all that surrounds the view is weather-beaten concrete and dead flora.

In the opening movement, unfortunately, the slideshow went awry. We were left staring at a blue-light Windows screensaver for several minutes. The malfunction jarred me. It also visibly jarred English and Stewart, as they kept one eye checking the projector at all times for the rest of the performance. 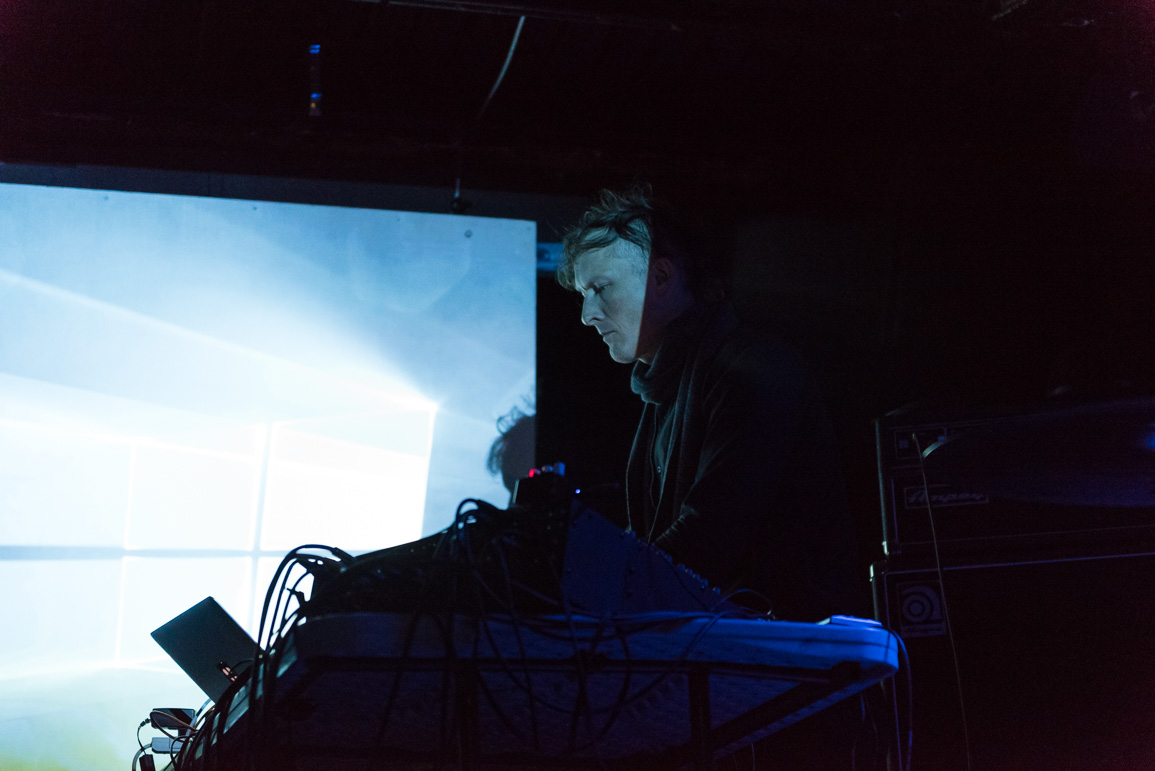 As Hexa crescendoed — as most sonically-yet-not-necessarily-rhythmically propelled sets crescendo — English and Stewart took mallets and drumsticks, respectively, to cymbals, while the underlying beat went into tachycardia. The gesture, however, edged towards excess, abandoning the nuanced resonant frequencies these metallic discs lent during the percussive contractions throughout the set.

Technical difficulties aside, Hexa headlined arguably the weirdest Mission Creek bill this year, the one for the truest heads. To be consumed by electronics without meter does away with all rules and preconceptions of (capital-M)usic. For some it’s draining. For others it’s final frontier.

The genre of industrial and the body are commonly collocated. Hexa’s soundscape grokked the machinations of factories as well as technocracy. Their solution: an inherent spirituality. I was left counting breaths.