So, you are a composer and performer whose music requires close listening, preferably in the dark. Your recent Iowa City show at the First United Methodist Church blew the audience away—or, rather, it sucked them into an all-enveloping temporary autonomous zone created with pipe organ and electronics. This aural explosion transported some listeners into the nether regions of their minds, or off into the ether.

The Challenge: You will soon perform at this summer’s Pitchfork Music Festival (July 13-15), a sun-drenched outdoor event in Chicago that is the exact opposite of that quiet, blackened church. Beer is flowing, friends are chatting and another band is playing off in the distance, penetrating your soundscape. What do you do? “A black rain onslaught that trumps everything else,” Tim Hecker answers without a pause. “Pushing the PA into extreme zones. I tend to use force and physicality in a festival context rather than something more nuanced, which would be a setup for failure.”

Much like his latest record, Ravedeath, 1972, his Mission Creek Festival appearance in Iowa City was anchored by a pipe organ set adrift in a sea of sounds that ebbed and flowed at high volumes. “I prefer secular performance spaces, but most pipe organs are situated in churches, and festival promoters tend to stick me there,” he tells me from his home in Montreal, Canada. “The upside is that the acoustics are often amazing in those venues, and the audience is captive.” 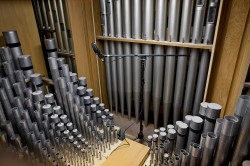 What one hears in these performances is the sound waves generated by the pipe organ blended with an amplified, “treated” version of that instrument. Hecker then mixes these elements into washes of electronics, natural room acoustics and other aural ephemera. Wall of sound? Perhaps. Ocean of sound? Getting closer. What makes his music so compelling is that it eludes simple description—particularly the “ambient” label he often gets stuck with. Rarely does ambient music reach out and grab you by the throat (or ears) the way Tim Hecker albums do. Their dynamic shifts and morphing, kaleidoscopic textures undermine attempts at distracted listening.

Ravedeath, 1972 is both a continuation of Hecker’s previous recording strategies and a departure. The main difference is the integration of a carefully recorded pipe organ into sound sketches that he brought to a church in Iceland. “I had these pieces that were kind of half-baked,” he says. “They had interesting starts, but they didn’t have enough dynamics. I riffed off of them on the organ, then recorded it within that space and demolished those sounds once again.” Hecker calls it his awakening to the world of “proper” recording. “That was the first time I really went that far, moving out of the hermetic zone of the mixing desk,” he tells me. “We used a lot of nice microphones and preamps and guitar amps to take advantage of the room sound.”

This discussion leads to an aspect of Hecker’s life that some listeners are unaware of: academia. He is currently completing a PhD in the Department of Art History and Communication Studies at McGill University. “My interest in the pipe organ came out of my academic work,” Hecker says. “For my research I traveled to a massive organ in Atlantic City, which has 33,000 pipes scattered throughout this huge building that seats thousands. That was the one thing that helped inspire my last album.” The Boardwalk Hall Auditorium Organ has several entries in The Guinness Book of World’s Records. Not only is it the “largest pipe organ ever constructed” and the “largest musical instrument ever constructed,” it is the “LOUDEST musical instrument ever constructed” (my emphases).

Tim Hecker started the PhD program at McGill six years ago and is now nearly done with his dissertation. Scholarship began as kind of a hobby, an interest he has pursued alongside music throughout his life. Luckily for him, one of the world’s preeminent sound scholars, Jonathan Sterne, teaches in the same city where he already lived. Sterne’s long-awaited book MP3: The Meaning of a Format will be published at the end of this summer on Duke University Press. “Jonathan was a deal clincher,” Hecker says of his decision to join the graduate program.

One of the odd things about my line of work is finding out that an artist I revere is also an advisee of one of my close friends and colleagues. “Tim has certainly done a lot to retune my ears, and he’s one of a small group of people who have helped me rethink my relationship to aesthetics,” Sterne says of the way he now asks questions and feels his way through problems. “Tim has added a measure of ‘Timishness’ to how I think about the world, and that’s the most valuable thing. Also, he has one of my favorite qualities in a scholar: he is idealistic about the value and purpose of intellectual work. He believes in the importance of ideas.”

In other words, Tim Hecker is one of the few people out there who can drop knowledge on your ass and bring a black rain onslaught to the Pitchfork Music Festival. .

Kembrew McLeod teaches at The University of Iowa, and plans to sing Twisted Sister’s “We’re Not Gonna Take It” once a day for the rest of the summer.