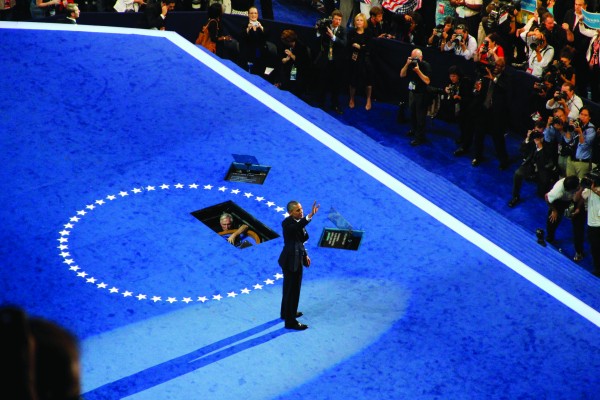 As Senator Edward Kennedy’s voice reverberates through the hall, I feel a curious quickening. I lift my eyes to the mega screen suspended from the ceiling of the Arena. There is Teddy, larger than life, in perfect cadence, speaking to us from beyond the grave, uplifting us, exhorting us to live up to our better nature. In rapid-fire succession the emotional punches keep coming. It is a masterful job of media editing. I squint my eyes a little to keep their dampness from being too obvious.

I am sitting in the nose bleed section of the Time Warner Arena in Charlotte, North Carolina, at the 2012 Democratic National Convention. I am a reporter, of sorts. More accurately an eyewitness. The reporter moniker implies a certain detached objectivity. I have no interest in pretending to be objective.

Politics, especially presidential politics, are mass participatory theatre and I love being an extra. This electoral system can only exist through a symbiotic relationship between those who deceive and those who want to be deceived. I beg my candidate to lie to me convincingly, to sculpt a narrative that inflames my passions, to deliver it with rhetoric so stirring that it propels me to my feet shouting “Yes, We Can!”

Unable to attend the Republican National Convention in person, I watched it through a media window that revealed performances lackluster and uninspiring, messages dull and xenophobic, deceptions butchered and laid out on a slab without even the pretense of being factual. To a person who is occasionally swayed by a conservative argument; who is drawn to the message of individual responsibility and accountability; who respects the root of the word conservative, this GOP convention offered nothing. Gov. Romney, in his acceptance speech, capped off this litany of disappointment by making the environmental crisis—arguably an existential threat to life on this planet as we have known it—the punchline to a joke. 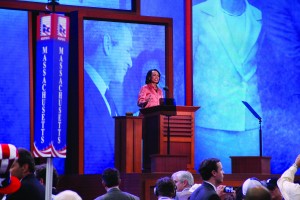 In comparison to that electronically mediated experience, this hall in Charlotte is alive with an energy that feeds upon itself like a benevolent fire. Fairness, access to  opportunity, respect for all, marriage equality, care for those less fortunate, the right to dream—all are packaged in fiery rhetoric and hurled point-blank at the partisan crowd in the Hall. The crowd jumps to its feet in near ecstasy as each speaker fires their words directly to the heart. Zach Wahls, yes, I also believe that every child deserves a family as loving and committed as yours; Elizabeth Warren, yes, I too have a problem with the rigged economic game; Emanuel Cleaver, yes, I too care for children and whether they go hungry; Julian Castro, yes, we should remove the shadow of deportation from a whole generation of dreamers.

The Graces float above. Sandra Fluke, who, like an aikido artist, turns hateful words into hope for a better future; Sister Simone Campbell delivers a message of morality, her words weighted by a lifetime of helping the poor; Michelle Obama, our Michelle, smiles benevolently down upon the delegates, her children. These strong women are not just supporting members of the Democratic party, they are its driving force, the standard bearers, the tip of the spear.

As Bill Clinton takes the stage to deliver his homily, an almost audible sigh of contentment comes from the crowd. His cadence is familiar, his folksy presentation is friendly, non-threatening and right on target. It is a good speech, and watching the recorded video of the speech after the convention, I realize that, televised, it was a great speech. Here, though, in the context of the hall, this speech is not the apex of the convention, but a satisfying punctuation mark at the end of a long, stirring sentence.

And Barack Obama? He is here, all around, but what the chattering class doesn’t seem to realize is that this spectacle is not so much about him anymore. Obama’s promise of change has taken on a life of its own, a palpable presence that can be felt in this room tonight. He does not need to fill the air with soaring rhetoric that puts the lift under these Democrats’ wings, because they have found a way to soar by themselves. Obama taught them a song. They have made it their own. All he needs to do at this convention is to show up, look around, and say in a smooth and steady voice, “I am Barack Obama. You are my message, and I approve of it.”

Jon traveled to Tampa, Florida, and Charlotte, North Carolina, for the GOP and Democratic Party national political conventions and was joined by Katie McGowan in Tampa, and Mark and Zabet NeuCollins in Charlotte. Katie is a UI graduate currently serving as education curator at the Museum of Contemporary Art in Detroit. Zabet is a college sophomore majoring in Human Ecology.

Additional photography, video and dispatches by the team are online on the Little Village blog, part of “First in the Nation,” a media project exploring the 2012 U.S. Presidential Elections and democracy in the nation. Find a collection of posts at LittleVillageMag.com/fitn