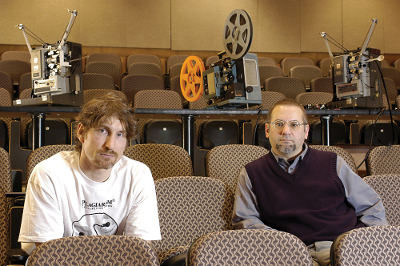 Lloyd Dunn (right) and John Heck of The Tape-beatles

The Tape-beatles practice plagiarism as an art form. The group, founded in 1987, adopted techniques and ideas from concrete music to create a musical project intended to have broader appeal. In a nutshell, this Iowa City group set itself the task of creating music without using musical instruments in the conventional sense.

In their early years, members Lloyd Dunn and John Heck were quite conscious of the cultural and economic context in which they worked–specifically the existence of copyright laws that define their activities as plagiarism. To this extent, they have adopted the phrase “Plagiarism: A Collective Vision” as their de facto motto, which they claimed to trademark. It carries with it an explicit and implicit cultural and political critique that foregrounds the notion that cultural property should be a “collective,” shared thing.

A free career-spanning mixtape by the Tape-beatles (also known as Public Works) will be available mid-September at creativelicense.info/mixtape.

The following originally appeared, in a longer form, in an edited volume I compiled with Rudolf Kuenzli, called Cutting Across Media, recently published by Duke University Press. It draws from numerous sources: a March 2005 interview I conducted with the Tape-beatles; back issues of Retrofuturism and PhotoStatic; my book Owning Culture: Authorship, Ownership, and Intellectual Property Law (2001); various writings found on the Tape-beatles’ Web site (pwp.detritus.net); and an article titled “Meet The Tape-beatles” (1999) by Todd Kimm, originally published in the Iowa City Icon.

Lloyd Dunn: Originally when we pretended to register the trademark, we wanted to create a sense of scandal. And we wanted to outrage certain more conservative parties about the creation of culture and what that entailed, and what originality was. Basically, it was an anti-Modernist move. And as time has gone by it has become less and less controversial. But since photography in the 19th century, artists have had to face the notion that there are suddenly machines that are able to produce–reproduce–nature better than they could. And so my interest has always been in using machines to make art.

John Heck: When we started working, we soon discovered that the biggest obstacle for doing the kind of work that we wanted to do was that we might have a problem with copyright laws and also attribution. And we imagined that in this kind of work, it would be clear what we were doing and we wouldn’t have to apologize. We made this small joke with registering a trademark for plagiarism as a process, as a way of working. And we felt that, somehow, Plagiarism® explained that so that we didn’t have to preface our work every time we presented it.

According to Retrofuturism, an appropriation-infused zine formerly published by Lloyd Dunn, The Tape-beatles were well aware of the history behind audio collage when they began. Dunn stated, “We were influenced by the French concrete musicians, such as Pierre Henri and Pierre Schaeffer, and a few other modernist composers like Edgard Varèse and John Cage. We were also heavily influenced by some pop music that had used tape effects and manipulation, such as the Beatles’ work.”

LD: What we wanted to do was exploit the possibilities of recording and audiotape, and in a sort of cheeky move, to pay homage to the Beatles and their studio recording experiments in the 1960s. We decided to claim that method as our own, as far as tape manipulation went, and so we called ourselves The Tape-beatles. … We were certainly aware of the avant-garde sound collage traditions, but most of our attitudes and positions came from popular culture. Actually, our first impulse in getting together was to form a pop music group that didn’t play any instruments. That was really the initial idea behind The Tape-beatles.

In The Tape-beatles’ version of expanded cinema, three 16 mm film projectors run simultaneously, creating a wide-screen collage of motion pictures made entirely of found footage. The center image is a tightly edited and scored reel which runs continuously and nonrepetitively in wild sync with the audio. During the piece, it is intermittently flanked by projected 16 mm film loops from the two other projectors, which serve to complete the spectacle and augment the images on the center screen.

JH: Early on, we were invited to perform in venues when we were simply a studio music group. When we were looking for our sound sources we very often came across filmstrips, and we started watching 16 mm films and things like that. And we tried mixing sound live using various devices, but it was very unsatisfying because we didn’t have a member dedicated to mixing the sound. So we arrived at simply creating a soundtrack and then using a CD to master our soundtrack, and we discovered that it would be wiser to actually perform the visuals than to try to recreate what we worked so hard to balance in our sound studio.

LD: We use three 16 mm projectors. The central one, the one in the center, is a carefully timed edited reel that works in time with the music. It has particular sync points, and we have to mess with the film speed on the projector in order to catch those sync points. And the flanking images come from film loops that we change throughout the performance, throughout the evening twenty or so times. We’ll use twenty different loops in a half hour or something like that to create this widescreen collage. Part of the aim of this is to use Eisenstein’s idea of collision, of collage being a sort of collision, where you take any two arbitrary images, put them together, and in time a third, new idea inevitably results.

During their presentations, the Tape-beatles have generally presented the expanded cinema works Good Times (2001), Matter (1997), and The Grand Delusion (1994). Other elements have been introduced, which are more theatrical and performance-like in nature, such as the “Entr’Acte” which uses a classical gramophone recording played through a paper cone, on which images are projected by means of a hand-cranked projector.

LD: All of our work was originally done on analog equipment. Now that we’re working digitally, we can sort of look back on that with nostalgia. The way the machines worked together was often inscrutable, and often mysterious things would happen or mistakes would happen that would become gems. We had to incorporate these audio gems into our work because we liked them so much, you know. And this was something we didn’t intend to create. This is something that sort of came about because, in a sense, we had this collaborative attitude not only between ourselves, but among us and the machines that we were using. I mean, my own background with making art is very self-consciously about making art with machines as opposed to making art with tools. I think that a machine is, simply, a more complex type of tool. So my early work was done with a photocopy machine.

JH: Would you say that we’re making nostalgia about nostalgia? A media nostalgia?

LD: Maybe, maybe. I mean, the shift to digital was a very natural one for us to make. I mean, we’d all been using computers, so obviously wanting to turn our computer into a digital workstation was a compelling thing for us to do. … The methods of working in analog and digital are very different. From my experience, the accidents in digital work are much less compelling. You almost have to plan what you want and hope you get it. And you can do this endless polishing with very little effort, and you usually can get pretty close to your initial idea. And sometimes you find that what you conceived isn’t quite what you want when you actually end up hearing it. I don’t want to sound like I’m down on digital, because I think it has great power and flexibility, but there are some aspects of it that are less satisfying. However, because of the flexibility that digital provides, you can conceive of things in digital that you never could make in tape. It creates possibilities. It creates compositional possibilities that we’ve tried to exploit.

JH: Maybe too many possibilities.

LD: Sometimes it feels that way.